Military charity Blind Veterans UK has signed the Armed Forces Covenant at an event hosted by the Ministry of Defence and Defence Relationship Management on 21 October 2021. 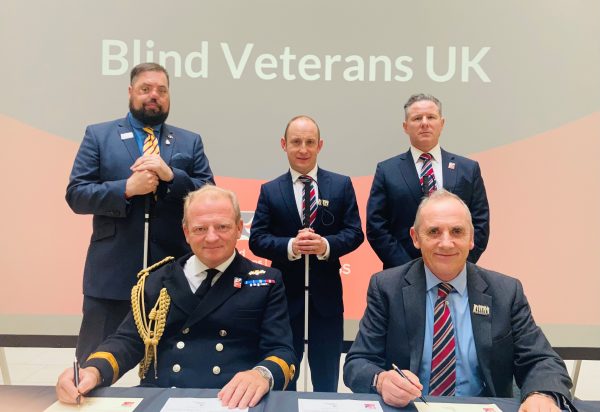 The Armed Forces Covenant is a pledge that together we acknowledge and understand that those who serve or who have served in the armed forces, and their families, should be treated with fairness and respect in the communities, economy and society they serve with their lives.

“We are extremely proud to be joining the wonderful family of organisations that have signed the Armed Forces Covenant.”

As well as signing the covenant the event was an opportunity for a number of speakers to talk on the theme of resilience, both in the field of defence and security and personally.

Hugh Tatton-Brown, Head of Cyber Strategy & Architecture, Ministry of Defence, spoke on the topic of cyber resilience and MoD strategic thinking. Blind veterans Alan Lock and Simon Brown also spoke on personal resilience and their journeys through the armed forces and since losing their sight.

“The theme of Resilience defined our charity from the earliest days and has been a driving force for us ever since.

“The two blind veteran speakers we heard from yesterday are exemplars through their demonstration of resilience in overcoming adversity.

“It was an honour for Simon and I to speak to this group about our journey as blind veterans, the challenges as well as the achievements that could only be realised with the support of Blind Veterans UK.

“We were just two speaking but we represent thousands more out there who have been supported to rebuild their lives after sight loss.”

Blind Veterans UK provides through life support to over 4000 blind veterans aged 29 to 106. The charity’s work continues, through specialist rehabilitation to promote independence and build resilience of those who have served and lost their sight.

The charity has also set out an ambitious goal for Blind Veterans UK, and blind veterans themselves, to be a force for good in wider society.

“Although it still remains our primary concern, we want to have a bigger impact beyond the immediate needs of our beneficiaries.

“That’s why this year we have given birth to BRAVO VICTOR, a new research charity whose purpose is to inspire, facilitate and focus the world’s best research scientists to improve the lives of the vision impaired and veterans.

“That’s why we are forging meaningful partnerships with business to advance knowledge, to find better ways of doing things and to keep us all at the cutting edge.”

The event was a fantastic opportunity to gather other members of the Covenant family together. Nick Caplin: added:

“I would like to thank Cisco, FTI Consulting, Herbert Smith Freehills, HSBC, ISG, Palo Alto Networks, Sky, and Vodafone for joining us yesterday and hope that we will be able to continue working with them and others to best serve the pledge that we have all made as signatories to the covenant.”