Military charity Blind Veterans UK has welcomed a new Chair and two new Trustees to its board. 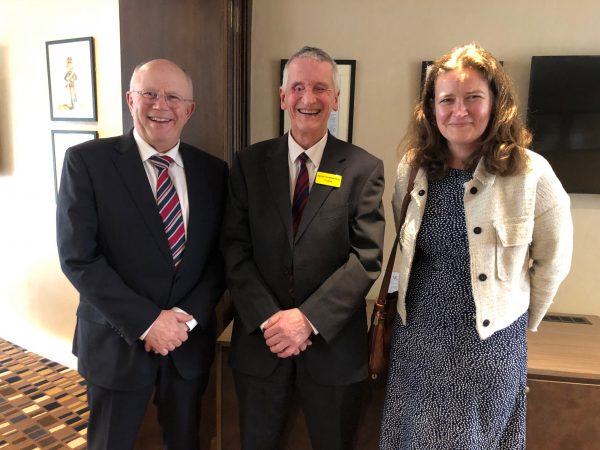 Barry Coupe who has served on the Blind Veterans UK board of trustees since 2017 has become the charity’s 9th Chair in its 107-year history.

Barry’s father was supported by Blind Veterans UK after losing his sight in 1943 while in the Royal Navy. He has worked as a non-executive for charities, and is a founding trustee of the Children’s Hospice for the Eastern Region in Cambridge. He was a school governor for 15 years and is an award-winning architect.

Barry took over the role from retiring Air Vice-Marshall Paul Luker after Paul’s nine years as a Trustee and Chair.

“I’m immensely proud to have been invited to become Chairman of Blind Veterans UK.

“My father, Des Coupe, was a blind veteran who, at just 20, whilst serving on MTB 637, during an action off the coast of Italy, had both his optic nerves severed by a piece of shrapnel.

“I bring to this role a passion for the organisation, which has been with me all my life and on behalf of my grateful family, it’s a great opportunity for me to give something back. One thing’s for sure; my father would have been immensely proud.”

New Trustee Jamie Cuthbertson is also a beneficiary of Blind Veterans UK. Jamie studied mechanical engineering at the University of Glasgow before joining the Army in 1982. In 1986, he was blinded in an explosives accident while serving as a Captain in the Royal Engineers. He rehabilitated with Blind Veterans UK, before gaining an MSc in information technology. Jamie has worked for charities for the blind for nearly 20 years, before running his own computer consultancy.

Clare Hayes has also joined the charity’s board of trustees. Clare worked as a civil servant from 1993 to 2021, in the Department for Work and Pensions, Cabinet Office and Ministry of Justice. She held senior roles in areas including pension reform, change programmes, organisational design and reviews, departmental governance, devolution and legal services. Clare has also worked on secondment in the London Borough of Hammersmith and Fulham children’s services department.

Blind Veterans UK supports thousands of blind veterans across the country, but knows there are up to tens of thousands more who still need its support to rebuild their lives after sight loss.