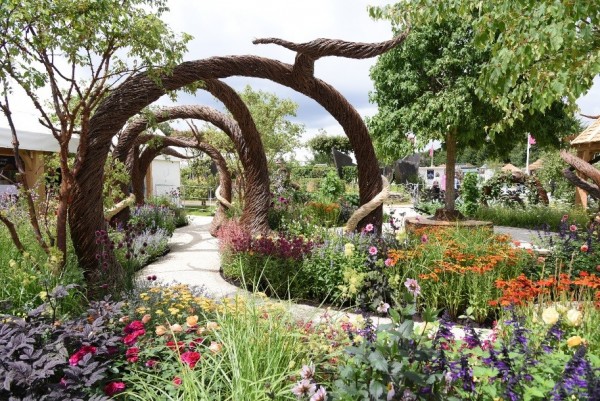 Blind Veterans UK has announced that its gold medal winning garden, which featured at the prestigious RHS Hampton Court Palace Flower Show throughout last week, has begun its relocation to the charity’s training and rehabilitation centre in Brighton.

The garden, which also won the Best Construction Award at the Hampton Court show, has started its move towards the centre in Ovingdean where it will be enjoyed by blind veterans for years to come.

The ‘It’s all about community garden’ was designed by celebrated designers Andrew Fisher Tomlin & Dan Bowyer and was one of the largest and best received show gardens at Hampton Court this year. On the opening day of the show, the garden was officially opened by Blind Veterans UK’s new Patron, Her Royal Highness The Countess of Wessex.

Blind Veterans UK is the national charity for vision-impaired ex-Service men and women. It supports anyone who has served in the UK Armed Forces, or who has done National Service, that is now living with significant sight loss.

The garden features traditional stone, oak and willow, which come together with ornamental trees, flowers, an orchard and a kitchen garden. The major structure is a willow vine sculpture that wraps around the whole garden. The sculpture, created by renowned artist Tom Hare, allowed visitors to walk through parts and experience the textures, colours and fragrance of the garden first hand. They also got to enjoy a number of art and craft sculptures and features made by blind veterans themselves.

Garden designer Andrew Fisher Tomlin said: “The blind veterans, volunteers and staff are an inspiring community that come together to ensure veterans recover their independence and discover a life beyond sight loss.

“I’m delighted that the garden will now live on in its new home in Brighton and will continue to be enjoyed by the whole Blind Veterans UK community for years to come.”

The charity was founded more than 100 years ago to support those blinded in the First World War. Now, the charity supports veterans regardless of when they served or how they lost their sight. The Blind Veterans UK community has grown and the charity now supports more than 4,000 veterans, more than ever before in its history.

Chief Executive of Blind Veterans UK, Major General (Rtd) Nick Caplin CB, said: “This garden, at the prestigious RHS Hampton Court Palace Flower Show, was a fantastic opportunity to reach out to the thousands of blind veterans out there who don’t know they’re entitled to our support.

For more than a century, the charity has been providing vital free training, rehabilitation, equipment and emotional support to blind and vision-impaired veterans no matter when they served or how they lost their sight. If you, or someone you know, served in the Armed Forces or did National Service and are now battling severe sight loss, find out how Blind Veterans UK could help by calling 0800 389 7979 or visiting blindveterans.org.uk/noonealone.