The BNTVA are organising a return to Christmas Island in 2018 for any veteran who would like to return to the Island to commemorate the 60th Anniversary of the largest Nuclear bomb that was detonated on the Island on 28th April 1958.

We are asking other military charities to sponsor a veteran or their family to return to the island.
The operation was a tri-force operation, with Army, Navy and RAF personnel involved. The return will include a dedication of a new memorial on the island to the veterans who gave so much to ensure that the UK was a Nuclear power.

The BNTVA cannot afford to fund the veterans return and many are trying to fund the trip themselves, but any help from other charities would be appreciated. If you could sponsor a veteran or their family to return to the island, this would be their last chance to return. Each person returning to the island costs £5,000 to sponsor as the trip will be complicated to arrange, with various stopovers at different sites. 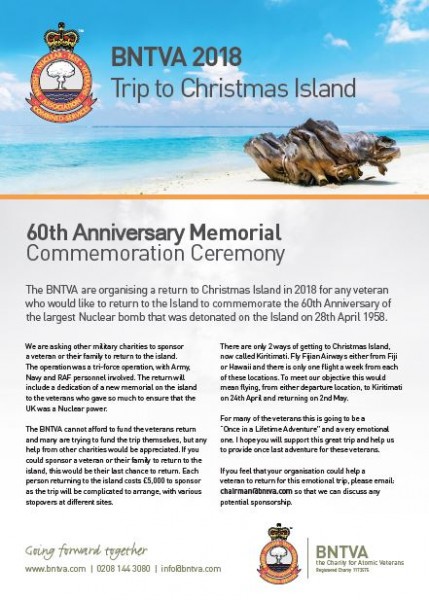 If you feel that your organisation could help a veteran to return for this emotional trip, please email:
chairman@bntva.com so that we can discuss any potential sponsorship.