Corporal Matthew Kent has completed his challenge of running 874 miles, the distance from Lands End to John O’Groats, to raise money for SSAFA, the Armed Forces charity and the RAF Benevolent Fund. 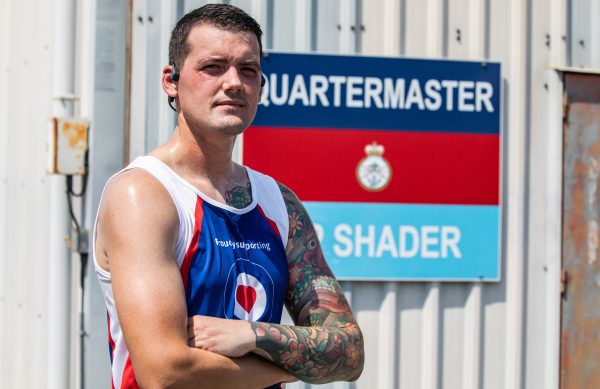 Whilst deployed in the Middle East and driven by a personal family tragedy; Corporal Matthew Kent raised money for the SSAFA, the Armed Forces charity and the Royal Air Force Benevolent Fund (RAFBF) by running 874 miles across his 7-month deployment.

Matthew set himself the challenge of running the distance from Lands End to the village of John o’Groats during his deployment. Through daily determination, he achieved the total of 874 miles, which required Matthew to run an average of 125 miles for 7 consecutive months.

Having experienced the heartbreak of losing his son Thomas, during a difficult childbirth, Matthew wanted to help the charities which offered incredible support to him and his wife Deena, a former RAF medic. In honour of Thomas’ memory, he raised invaluable funds for SSAFA and the RAFBF, charities which offer specialist support to fellow Armed Forces personnel (including reservists), veterans and their families.

Reflecting on the event, Matthew said:

“The support me and my wife received from SSAFA and the RAFBF was incredible. They supported us through the darkest of times and I have wanted to show my gratitude ever since.”

“The Lands End to John O’Groats virtual run was the one challenge I was constantly drawn to. I am by no means a natural runner and suffered a few injuries at the start. The heat made every step that much tougher but having the backing from colleagues, friends and family got me to the finish line.”.

“No parent should ever have to experience the loss of a child and I can’t imagine what they went through. I am so thankful we have military charities like SSAFA and the RAFBF, who were able to support Matthew during such a heart-breaking time.”

He added, “Matthew is a truly valued member of the team. What he has achieved during this tour and through this event is truly inspirational and will provide further support to these 2 great charities.”

“We are incredibly proud of Matthew and cannot thank him enough for choosing to fundraise for SSAFA, allowing us to continue to support the Armed Forces community in their time of need.”

Matthew has smashed his fundraising target of £1,000 and has now raised over £1,440. This money will help provide lifelong support and welfare provisions to other Armed Forces personnel. These charities issue services which have, and continue to, improve the lives of many.

If you would like to support Matthew, you can donate here: justgiving.com/crowdfunding/matthew-kent-endtoend