As the anniversary to mark the battle of St Valery-en-Caux approaches, an international search has been launched to uncover the identity of a fallen hero. The 51st Highland Division soldier evaded capture during the infamous Second World War battle but would later be betrayed in the French fishing port and now rests in an unnamed grave. 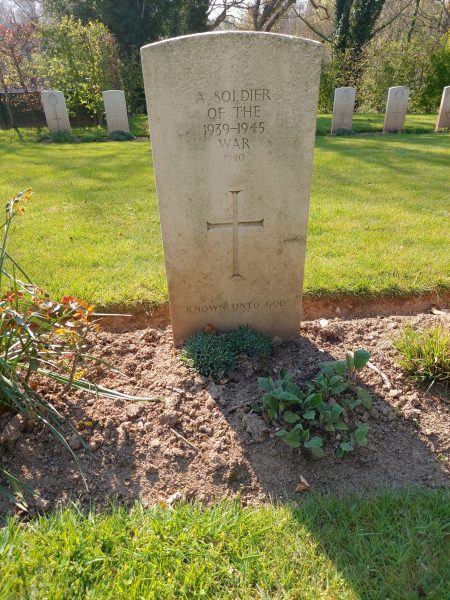 Days after the mass-evacuations at Dunkirk, thousands of men from the 51st Highland Division remained on mainland Europe supporting their French allies. As German troops advanced through Normandy, the 51st fought valiantly, protecting French citizens, and hoping that evacuation by sea would be forthcoming.

On 12 June 1940, German Panzer units surrounded the Division at the coastal commune of St Valery. This, alongside a curtain of heavy fog, made the long-awaited flotilla rescue unviable, and they were forced to surrender. Those who were not killed in the fighting were captured as Prisoners of War and marched to camps in Eastern Europe, where they remained for five gruelling years.

Following the commemorations to mark the 80th anniversary of St Valery last June, which saw hundreds of pipers around the world play in unison in tribute to the ‘Forgotten 51st’, a remarkable story has emerged. One brave soldier miraculously evaded capture and was taken in by a local French family, hiding him from the occupying German forces.

“We were contacted by Monsieur Patrick Prieur, a 65-year-old St Valery resident whose grandparents and father remained in the town during the entirety of the war. He told us the story of the escapee and the tragedy that befell him” said Dr Claire Armstrong, Chief Executive of Legion Scotland. “Until last year the battle of St Valery was relatively unknown, but we set that right with commemorations that reached around the world. As we approach the 81st anniversary of the Battle, we hope to identify this Scottish hero, give him the recognition he deserves, and bring peace to his family.”

Patrick Prieur recalled the tale his late father told him:

“A soldier from the 51st Highland Division was hidden by a local family in the village. They bonded, and the family learned that he was a married man with a wife and two daughters waiting for him to return home.

“For several weeks, the soldier remained hidden, but regretfully he was eventually discovered by German troops and marched through the town to the municipal cemetery. After being forced to dig his own grave, he was positioned against the cemetery wall and shot. His death deeply upset the townspeople— who had been aware of his hiding—and especially my father, who was only eleven at the time.

“In later years, the Franco-British military cemetery was built, and his body was moved there. His grave is marked as ‘Known unto God’, and my father and other villagers tended to it for decades after the war ended.” Monsieur Prieur continued: “My father had been gifted a piece of paper on which the soldier’s name was written, ‘Keller Len Scott’, and this became his prized possession. He desperately wanted to find the soldier’s family to tell them what had happened to their beloved and where he was laid to rest, but having very little information, he struggled. In 2014 my father passed away and being eager to finish what he started I recently contacted Poppyscotland and the Highland Reserve Forces’ and Cadets’ Association to ask for help.”

“We started to do our own research to unearth the fallen soldier’s identity but only got so far. We believe the name order on the piece of paper may have been written in military fashion, with the surname preceding any given names, so the family name might be Keller. We’re now at an impasse, struggling to find additional information through our own resources, so we need the knowledge of the wider community to continue our efforts.”

In June 2020, in a bid to raise public awareness of the events that took place at St Valery that had largely been forgotten by history, Legion Scotland, Poppyscotland and RCET: Scotland’s Armed Forces Children’s Charity, collaborated to organise a fitting tribute. More than 500 pipers from 16 countries across five continents played the iconic pipe march, ‘Heroes of St. Valery’, to memorialise those who fought and fell.

“As the 81st anniversary approaches we want to capture the hearts and minds of the public once more. We are urging anyone who believes they know of or has any information about our ‘Unknown Solider’—no matter how small—to get in touch. We are also inviting pipers to take centre stage again at the 2021 commemorations by leading tributes in their local communities playing ‘Heroes of St Valery’ on 12th June at 10am.

“This brave man fought valiantly for his country and to repay our debt to him for his service would be an honour; not only for Legion Scotland as custodians of remembrance, but for his family, Monsieur Prieur’s father, the people of St. Valery and, ultimately, for all the ‘Unknown Soldiers’ who sacrificed their lives for us.”

Poppyscotland is eager to hear from anyone that has pertinent information that can assist them in their pursuit of discovering the soldier’s identity. For more information visit poppyscotland.org.uk/stvalery