The RAF Benevolent Fund has awarded a grant of £20,000 to Worthing-based charity, Care for Veterans, towards mixed rehabilitation for RAF veterans and their dependants throughout 2020. 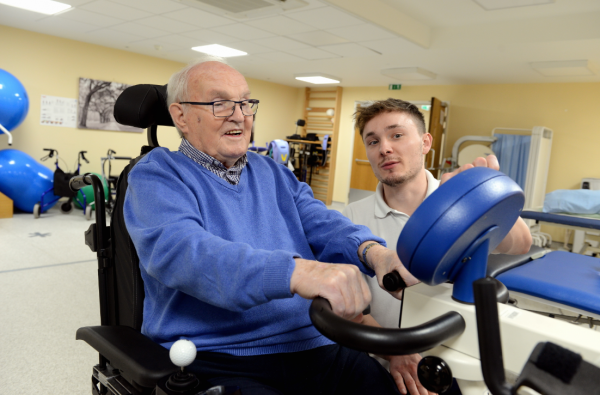 The RAF Benevolent Fund is the RAF’s leading welfare charity. It provides support for all serving and former members of the RAF as well as their partners and dependent children.
Care for Veterans provides residential nursing care and rehabilitation to physically disabled ex-Service personnel, including those who have served in the RAF. This generous donation from the RAF Benevolent Fund will pay for therapy sessions such a physiotherapy, occupational therapy, speech and language therapy, social and recreation sessions, and neuropsychology for RAF veterans like Tony Walker.
Tony Walker was born in Worthing in 1933 and lived in the town all his life. He was a young boy when the Second World War began, but still remembers hearing the air raid sirens. He explained:

“We came up from the shelter, and buildings that used to be there just weren’t there anymore!” Tony’s stepfather served in the Army during the War and spent time in a Japanese prisoner of war camp after being captured on the Burma Railway. Tony said: “He found it very difficult when he returned home, and never spoke about his experience over there.”

Tony started his National Service in the RAF when he was 18 years old. His first posting was at RAF Padgate, then he moved to RAF Hendersford for his ‘square-bashing’ (marching drills and other military exercises). After National Service, he went back to complete his carpentry apprenticeship and worked as a carpenter until his retirement.
Tony moved to live at Care for Veterans in March 2019. He was diagnosed with Parkinson’s seven years ago, and as he explained:

“It just started with small shakes that didn’t really affect me. It was while I was caring for my wife that things got worse, and I found I couldn’t do as many things as I used to.”

Since being at Care for Veterans, Tony has been on day trips which have helped to build his confidence and really bring him out of his shell. He’s always up for a challenge and was thrilled to take part in the Worthing 10K this year, being pushed around the course in his wheelchair by some Care for Veterans’ supporters. He was part of a 100-strong team flying the centenary flag for the charity.
Tony has regular physiotherapy sessions, he’s extremely focused, and even studies the theory behind his practice. When he arrived at Care for Veterans, he could walk with a Zimmer frame, but his steps were irregular, unstable and he rushed along – often with the frame too far ahead. With poor dynamic balance and muscle co-ordination, Tony was at high risk of falling. He has made impressive progress since and is now able to walk 50 meters. Tony’s gait has really improved, and he’s learnt to co-ordinate his walking rhythm with the Zimmer frame.  He does this by saying out loud: “frame … step … frame … step.”
Tony is highly motivated, and always proud when he achieves a therapeutic goal. He said:

“It’s good to put yourself through the gym, see if you can do it, keep yourself moving. When I first got to Care for Veterans, I was feeling a bit sorry for myself. Then I met a guy who was less able than me, and I thought, why am I complaining? You’ve got to make the best of it, haven’t you?”

About Care for Veterans

Care for Veterans (formerly The Queen Alexandra Hospital Home) was established in 1919 – the charity celebrated its centenary last year.

Care for Veterans is a registered charity, providing care and rehabilitation for physically disabled ex-Service personnel and their families. Our residents’ needs are complex and many have multiple disabilities. Many have an Acquired Brain Injury and some have neurological disorders such as Parkinson’s or Multiple Sclerosis. Others are paralysed or do not have use of their limbs and some are terminally ill. We support on average 140 residents a year.
We care for up to 60 residents at any one time.
Our residents are aged between 34 and 96.
Our residents represent the tri-services: Royal Navy, Army and RAF.
Services at Care for Veterans include nursing, physiotherapy, occupational therapy, neuropsychology, speech and language therapy, an active social and recreation department, rehabilitation kitchen, a chaplaincy service, counselling, IT facilities, a rehabilitation garden, sensory room, function room, and regular outings on our specially adapted coach.
With no regular government funding, Care for Veterans must raise over £1.9 million each year to maintain its nursing and rehabilitation services for ex-Servicemen and women.
Search News
Latest News
Feedback