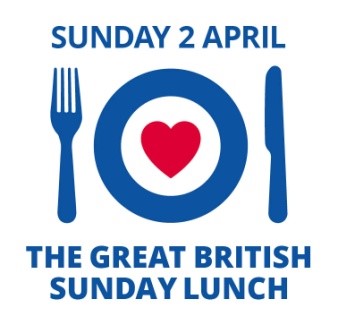 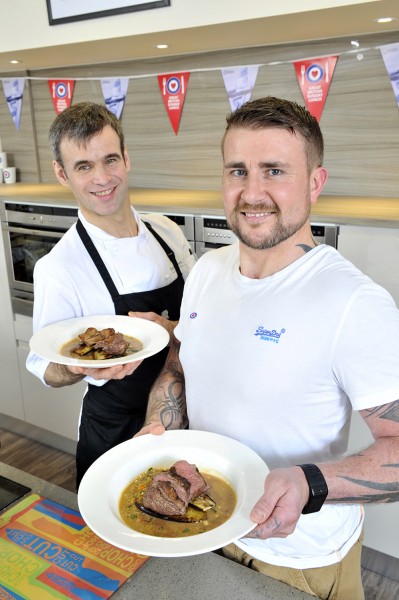 RAF hero Stuart Robinson has helped launch the RAF Benevolent Fund’s national fundraiser, the Great British Sunday Lunch. The former RAF Gunner suffered life-changing injuries in 2013 when his vehicle hit an IED in Afghanistan, resulting in the loss of both his legs. He was joined at his home in Morecambe, Lancs, by the Midland Hotel’s head chef, Michael Wilson who helped him sharpen up his culinary skills and prepare a mouth-watering dish.

Together, they prepared a delicious dish of roast rump of lamb, spiced pearl barley broth and cumin roasted aubergines showing how easy it can be to prepare a special dish at home. They called upon people up and down the country to support the Great British Sunday Lunch event on Sunday 2 April by creating their own tasty dishes and hosting friends and family to raise money for the RAF’s leading welfare charity.

“Sunday lunch is a great British tradition that families can enjoy together, so why not sit down on Sunday 2 April and host a meal in aid of the Royal Air Force Benevolent Fund. I have been fortunate enough to have been supported by the Fund since sustaining my injuries in 2013 and their help has enabled me to live a normal life as a husband and a father. Having seen first-hand what a difference they make to both our veterans and those serving today, I encourage people across the country to get involved and give something back.”

“I am always humbled when I hear stories about the men and women of the Royal Air Force and the sacrifices they have made. Without their bravery we would not enjoy the freedom we have today, and I think it’s important that we do all that we can to thank them.”

“It’s been an honour, privilege and inspiration to have met Stuart and prepare a meal together at his family home for this campaign. The RAF Benevolent Fund’s Great British Sunday Lunch is a fantastic fundraising idea and The Midland was keen to be involved in supporting such a worthy cause. Members of the RAF, and all our UK armed forces, continually make brave sacrifices and deserve all the support we can give to them, and the charities that support them.”

The money raised from the Great British Sunday Lunch will go towards supporting the vital work the RAF Benevolent Fund does to support the whole RAF family, from the youngest child on an RAF station, to RAF veterans living in retirement. Last year the RAF Benevolent Fund spent over £20 million helping more than 40,000 members of the RAF family with financial, practical and emotional support.

“The Fund receives no routine Government funding so events like the Great British Sunday Lunch are essential to enable us to carry out the work we do. Last time our brilliant supporters held some truly inspiring lunches from hanger dances in New Zealand to street parties in Buckinghamshire. We are looking forward to see what they do this year.”

For more information on the Great British Sunday Lunch, or to sign up to host your own event, please visit www.rafbf.org/gbsl.

The overriding ethos of The Great British Sunday Lunch is that it gives people a reason to unwind and relax in the company of friends and loved ones, using the time-honoured British pastime of a Sunday lunch as a way of raising money for the RAF Benevolent Fund. It’s a celebration of a classic British tradition, paired with a long-established and well respected charity.

About the RAF Benevolent Fund: The Royal Air Force Benevolent Fund is the RAF’s leading welfare charity, providing financial, practical and emotional support to serving and former members of the RAF, as well as their partners and dependants. We help members of the RAF family with everything from disability, injury, financial hardship and youth support to living independently and providing dignity in retirement.

About Michael Wilson: Michael Wilson is a head chef with English Lakes Hotels Resorts & Venues. His team at the iconic art-deco Midland Hotel in Morecambe prides itself on serving contemporary cuisine and locally sourced dishes. The first kitchen he worked in was at the Red Lion, Grasmere, in his home county of Cumbria, joining the culinary team there on a work placement from school.  Early influences as his career developed include chefs Clive Dickson and Steven Doherty and the very high standards they set themselves. Whilst his favourite chef is Alain Ducasse, one of the world’s most inspirational chefs who excels in French cuisine and innovative dining concepts, Michael’s food philosophy is the idea that simplicity often brings out the best in the flavour of ingredients.  His signature dish is a slow cooked blade of beef, Bourguignon creamy mashed potatoes, with a selection of greens and a red wine sauce.