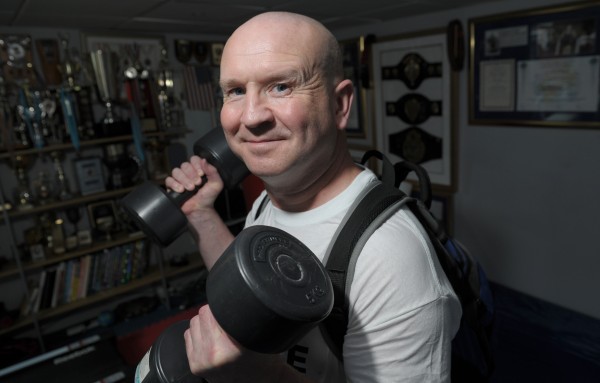 Currently the ‘Champion of Champions’ World Record title holder for the most fitness endurance records in one year, Paddy is now on target to achieve another historic milestone by reaching his 550th documented feat which will take place at The Royal British Legion Club in Berkswell, Solihull at 12pm on 12th February.

The father of two from Balsall Common, Warwickshire, has already set and broken 536 strength speed stamina physical fitness challenges under eight different sporting categories. His aim is to reach 550 documented records, with the milestone challenge to include a cross country speed march carrying over 40 lb in weight on his back and a weight lifting discipline and step ups feat on a 15 inch bench to complete the 550 title.

Dean Gould, President and Founder of the Registry of World Record Holders said: “Paddy Doyle has been breaking world records for more than 28 years and in this time has become one of the world’s top record breakers.

“He presently holds 530 titles to his name under eight different sporting categories and has represented the UK many times for the World Record Cup and other competitions. During these competitions Paddy has set records for most records broken and set and holds record on most points won. Paddy has shown no signs of slowing down and recently has set many new records for Mountain Bike Cross Country Speed Records, which is an exciting new category which is attracting much interest in the media”.

Paddy said: “After my 500th record-breaking achievement I felt I couldn’t stop and my consistency of training and regular fitness endurance challenge titles has resulted in me beating the bench mark times laid down time and time again by the World Record Bodies.”

Paddy has previously served in the Army’s Parachute Regiment for over two years and the RAF Reserves for five. After leaving the Armed Forces he was aided by The Royal British Legion by being given financial assistance in obtaining a BTEC3 which assisted him with his employment prospects. Paddy’s World Record attempts have therefore also aided in raising awareness and funds for the Legion’s work with the Armed Forces community.

Paddy is now a part-time public services lecturer and a fitness instructor and feels the Legion’s assistance was key to helping him transition back into civilian life as smoothly as possible.

The 550th challenge will take place at The Royal British Legion Club in Berkswell, Solihull at 12pm on 12th February with the public welcome.