You are here: Home / News / News / Championing support for our Armed Forces Community

DWP are transforming the way members of the Armed Forces Community are supported. 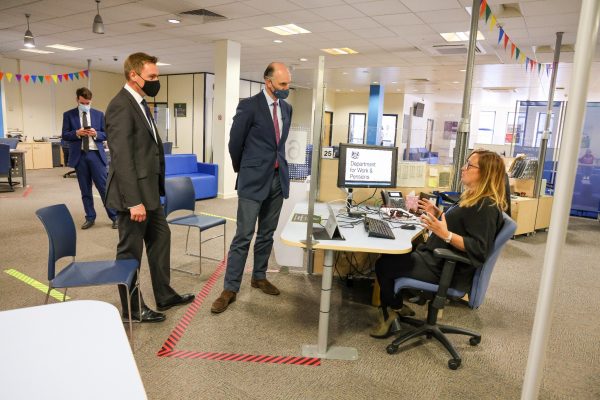 Building on the existing network of Armed Forces Champions, a new model is now providing effective tailored support to veterans, service personnel and their families, working alongside and complementing an additional 13,500 Work Coaches the department has recruited across the country.

As before, the Champions have specific responsibilities for supporting members of the Armed Forces Community and raising awareness amongst other DWP staff of the issues some veterans, serving personnel and their families may face. But the new model means they are now working directly with them, personally handling some claims and helping to resolve complex cases where necessary. People can ask their Work Coach to signpost them to their local Armed Forces Champion.

The 11 group Leads will help the Department to build capability on Armed Forces issues across the network, sharing best practices, improving consistency of support and proactively working with the Tri-Services on recruitment and resettlement.

Many of the Leads and Champions, along with other jobcentre staff, will have previously served in the forces, or will have family members who have served and can draw upon their own experiences to help veterans, serving personnel, and families move forward.

Alongside this new model for their Champions network, DWP has also recently introduced an Armed Forces question into the Universal Credit (UC) system.  As part of the online application process all people now making a claim to UC are asked if they are a veteran or are currently serving. By ticking the box serving personnel and veterans can identify themselves to receive additional help and support.

“The Armed Forces do our country proud and we are forever grateful to them for the sacrifices they make in order to serve our nation.”

“It’s not just about recognising that though, veterans offer a range of transferrable skills like no other – they are a gold mine of talent.”

“This network will build on what has been in place and help to provide additional specialist, individual support to them and their families as they take the first steps to find a job and receive the financial support they are entitled to, helping them better readjust to civilian life.”

“Those who are serving in the Armed Forces provide an invaluable contribution to society and it’s important they, and their families, feel fully supported when claiming benefits.”

“The Universal Credit Armed Forces “identifier” will help us better match our resources to where demand for support from members of the Armed Forces Community is, and eventually enable us to carry out our own research on employment outcomes for veterans.”

“It can be a massive culture shock for those leaving the Armed Forces” said Sarah Mallaghan, DWP Armed Forces Champions Lead for Wales.

“But this network will ultimately help to ensure the right people are out there providing the right kind of support where it’s needed, when it’s needed.”

“We want service personnel and their families to feel confident in claiming the benefits they’re entitled to, and the simple design of Universal Credit helps make this process as easy as possible.”

“Claiming financial support shouldn’t be a worry when adjusting to civilian life.”

“We want service personnel and their families to feel confident in claiming the benefits they’re entitled to, and access the support that is on offer through Jobcentre Plus.”

“Everyone who makes a claim to Universal Credit will be assigned a Work Coach at one of our jobcentres. They will assist them to help remove the barriers to work, help with CVs, interview skills and finding a job. A raft of support is available.”

“Every Jobcentre Plus district in the country now has an Armed Forces Champion providing direct support to former services personnel as well as their families to help them make new benefit claims, and will sign-post them to other organisations where appropriate.”

“The new network of local Champions, and group leads, stationed in Jobcentres in England, Scotland and Wales will also support veterans to retrain and apply for work.”

Partner organisations wishing to contact Armed Forces Champions or Leads should use the relevant email address from this list: