The Chair of Trustees at Blind Veterans UK walked 70km in 24 hours this weekend, ahead of his 70th birthday in July, to support the national charity for blind and vision-impaired ex-Service men and women. 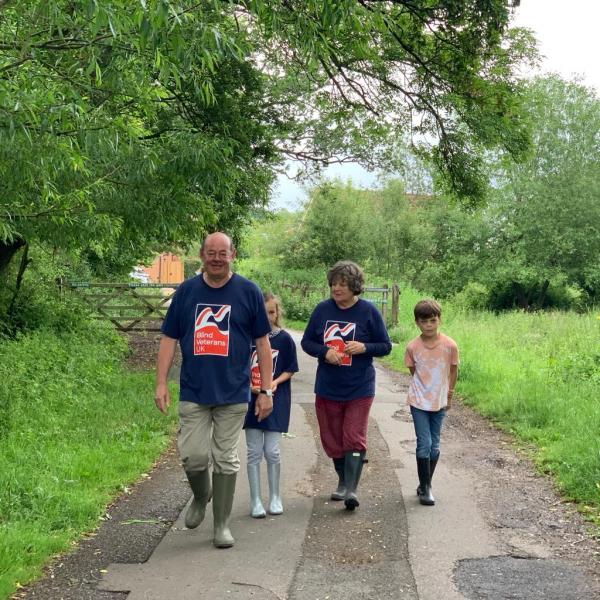 Paul Luker, 69 and a North Warnborough resident, decided to complete two separate challenges before his 70th birthday this year. Paul set out to walk the equivalent of 70 marathons in one year and completed the 24-hour challenge on the 19/20 June. Paul says:

“The real challenge was in keeping going for 24 hours in mainly wet weather but my wife, three daughters, son-in-law  and two grandchildren all took turns to walk a part of the journey with me. I was genuinely surprised by all the encouragement from people online and offline. I would like to say thank you to everyone who has donated, everyone has been so generous!”

Paul decided to walk the equivalent of 70 marathons in his 70th year last summer but has already passed his target. He says:

“I’m on my way to complete well over 90 before my birthday! I normally walk around 6 miles a day, so I decided I needed to do something more than my original challenge. I have also gone over my fundraising target with over £7000 in the Just Giving pot so far!”

Paul has been a trustee at Blind Veterans UK for 10 years and has been Chair for the last four. During his time with the charity, Paul has seen first-hand the vital support that charity provides and has met many inspirational veterans. Paul says:

“The charity gives people their lives back. I receive letters regularly from blind veterans who say how much the charity has helped them. Inspirational veterans like Captain Tom who did so much for the NHS, influenced me to fundraise for Blind Veterans UK”.

Air Vice-Marshal Paul joined the Royal Air Force in 1968 at the age of 17. Specialising as a helicopter pilot he started his operational career with No 28 Squadron in Hong Kong, eventually becoming Officer Commanding No.7 Squadron and later Commanding Officer of RAF Odiham. Following three years as Commander of the Joint Helicopter Command, he then served as the Deputy Commanding General of Coalition Forces in Afghanistan before retiring in 2006. A second career as the chief executive of the Council of Reserve Forces and Cadets Associations from 2006 until 2016, provided the capacity to become a trustee of Blind Veterans UK.  Paul says:

“I spent almost 40 years in the Royal Air Force so when I retired, I knew I wanted to give something back to the military community”.

Paul will be standing down as Chair of Trustees at Blind Veterans UK so has decided to complete these two challenges before this. Paul says:

“This last year has been really difficult – both in raising funds and being able to continue providing support.  I am immensely proud of the way our staff and volunteers have rallied to the extra challenge of Covid-19 and risen above it”.

To support Paul and make a donation to his Just Giving page, please visit: https://www.justgiving.com/fundraising/PaulLuker