RAF veterans Mal Craghill and Martin Wintermeyer will be cycling from St Eval in Cornwall to Washington, Tyne and Wear as part of a 690 mile challenge; the Tornado Tribute Tour of England. 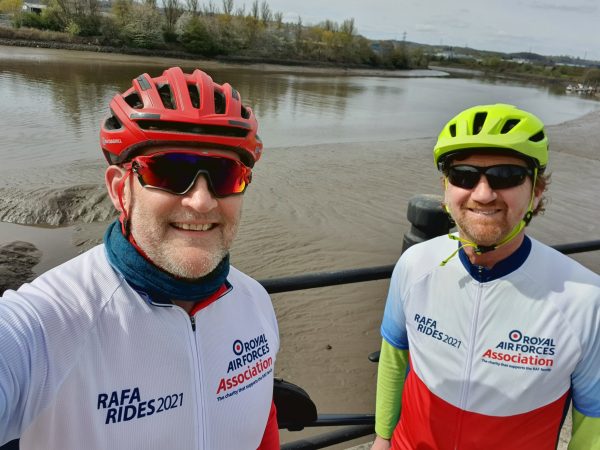 The challenge, raising money for the Royal Air Forces Association, is in memory of friends and colleagues killed training for and during the first Gulf War.

Mal and Martin were all set for their Tornado Tribute Tour of England (TTTE) to start on 19 February. Lockdown three put paid to their plans for this ride, but the intrepid pair were not deterred. After training hard for months, Mal and Martin will start their ride in Cornwall on 18 June. Taking place over ten days, the ride will finish in Washington on Sunday 27 June.

They will be joined along the way by MP Johnny Mercer, prisoners of war John Peters, Bob Ankerson, Dave Waddington and Robbie Stewart.

On their way up the country, they will visit and lay wreaths at all the English grave sites of the Tornado aircrew lost in the Middle East 30 years ago, as well as the National Memorial Arboretum in Staffordshire to pay their respects at the Gulf War Memorial and the Armed Forces Memorial to remember all those who lost their lives in the conflict.

The latter commemorates not just the seven Tornado aircrew killed on deployed operations, but also those lost in training accidents in the UK. They will also remember the two pilots from the RAF Jaguar force who were killed. They will be visiting the American Cemetery near Cambridge, and marking British Army losses by laying a wreath at the Catterick Camp Centre. In total Mal and Martin will honour the memory of 13 RAF and one US Air Force aircrew, as well as all those lost during the conflict in all armed forces.

Mal and Martin had originally hoped to raise £10,000 for the Royal Air Forces Association, the charity that supports the RAF family, but they have reached over £20,000.

“Mal and I want to thank everyone who has supported us so far, from our sponsors, to those who joined us virtually on our training rides, to those who have kindly made donations to the RAF Association and most of all to the families of the guys we lost. Their support has meant so much to us.”

“We have been preparing for this ride for almost a year, so it is great to finally get going. The ride will give us both the opportunity to think and reflect, and process the grief we weren’t able to confront 30 years ago.”

Mal and Martin would like to thank the following sponsors and supporters, without whom they could not have ridden so far and achieved so much already…