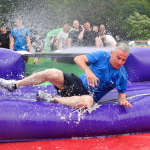 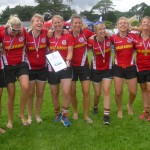 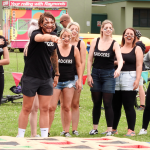 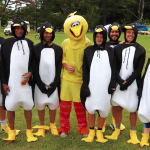 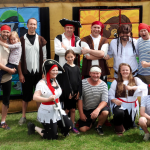 Men dressed as penguins and a group decked out in pirate costumes were just some of the sights on show when a charity held an It’s a Knockout contest.

Turn to Starboard – a charity that help injured veterans by taking them sailing – hosted the event at Boscawen Park in Malpas near Truro on Sunday July 9 in front of hundreds of spectators.

Thirteen teams in different levels of fancy dress and ranging in age from adults to young children competed for top scores in a series of inflatable obstacle challenges.

Events included having to dive through a foam-filled inflatable tunnel while carrying a piece of a jigsaw before having to stick the piece on an inflatable wall and solving a puzzle.

Another event was a human caterpillar race where teams had to balance a jug of water without spilling a drop.

Winning team spokesperson Kat Barbery-Redd, 35, of Newquay Ladies Hockey Club said: “It feels awesome to have won. We didn’t come expecting to win and just came along for the laugh, although we are quite competitive so when we realised we were in with a chance of winning at half time we though ‘right, let’s go for it!’ It’s been lots of fun and everyone has been really friendly which has made it a fantastic day.”

Martin Haseman, 52, of Watson Marlow in Falmouth said: “It’s been a brilliant day and we’ve all had a great time. We entered two teams from our company so there has been a bit of rivalry but in a friendly way. All the events have been brilliant, particularly the blind-folded horses which made us laugh the most.”

Rachel Spargo, 37, from Inkfish Hair and Beauty in Truro said the salon team jumped on the opportunity to take part in the challenge.

She said: “It’s been an amazing day and we’ve loved every minute. We’ve done this kind of event twice before and as soon as we heard about Turn to Starboard’s event we were like ‘we’ve gotta do it!’. We’ve all had a great day and look forward to taking part again next year.”

Turn to Starboard event organiser Lou Pearce said she was delighted with the turn out and that money raised will go towards supporting those affected by military operations.

“It’s been a hugely successful day and we would like to say a huge thank you to all the teams who entered, all the sponsors and exhibitors and everyone who attended,” said Ms Pearce. “We also managed to raise lots of awareness about the service the charity offers.”

The It’s a Knockout competition was not the only thing on offer at Boscawen Park. A children’s fun fair, rodeo bull, Zorb balls, food stalls and a Skinners Brewery beer tent, were popular with the hundreds of visitors throughout the day.