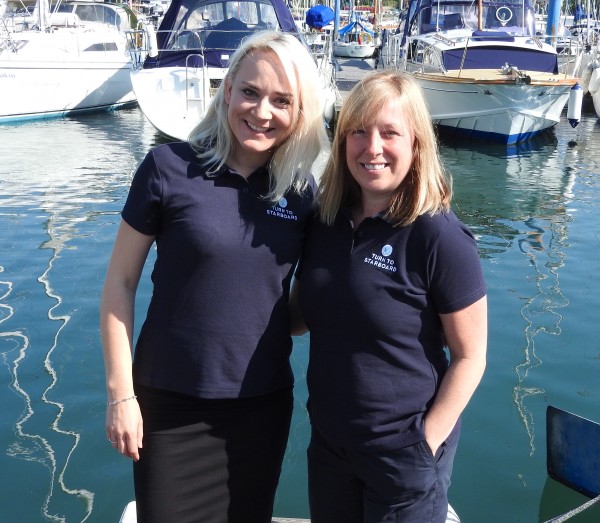 A charity in Falmouth who support veterans affected by military operations has announced the appointment of two new staff members.

Nadia Hughes-Penzer is appointed Events and Fundraising Coordinator at Turn to Starboard, a sailing charity based at Falmouth Marina. She is joined by communications expert Marie Harris who will help to promote a round Britain Challenge sailing expedition organised by the charity and sets sail next month.

Turn to Starboard support injured veterans from all over the UK by taking them sailing and help many to gain RYA sailing qualifications to start new careers. Nadia decided to join the charity after being inspired by the service it offers.

She said: “I’ve always wanted to work for a charity and when I found out about Turn to Starboard I was completely overwhelmed. I feel very strongly about how important it is to look after those that have put themselves on the line for the rest of us and the guys and girls that have been affected by military operations deserve to be able to come back and be able to lead as normal and happy lives as possible. Being just a small part of something that helps to achieve this is humbling, beautiful and rewarding.”

Nadia is joined in the charity’s office by Marie Harris in a Communications Support role.

Marie also runs her own HR consultancy business and has many years of communications experience along with a Public Relations and Media degree. She will use her skills and passion for sailing to help promote the Round Britain Challenge 2017 where seventeen veterans will attempt to sail around Britain on a 92-foot tall ship.

Marie said: “It feels great to be working with an organisation that helps military personnel affected by operations and rewarding to see so many individuals gain new skills and sailing qualifications. I hope I can play a part in raising awareness about the challenges some veterans can face after leaving the Service life through the round Britain Challenge expedition.”