A blind veteran from Cheshire will spend the festive period with other vision-impaired ex-Service men and women at Blind Veterans UK’s centre in Llandudno.

Every year the charity invites beneficiaries, like Jim Sherratt, 87 and from Nantwich, who would otherwise be alone at Christmas, to spend the week at one of its training and rehabilitation centres. 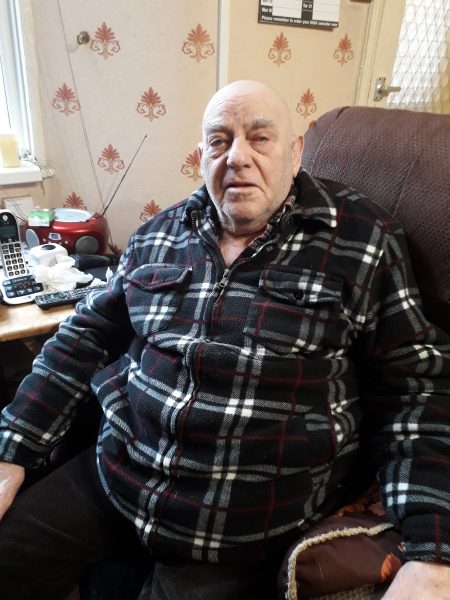 Born in 1932 and brought up in Nantwich, Jim Sherratt joined the Royal Army Ordnance Corps for National Service in 1952 and served in the UK, mainly as an Armourer, until discharge as a Private in 1954. Following service he returned to his previous job as a bricklayer and was then self-employed in the building trade for the rest of his working life.

Jim lost his sight much later in life due to diabetic maculopathy and describes how hard that was for him:

“I remember being told that my sight was eventually going to go completely and if I’m honest I felt suicidal. I thought what’s the point in carrying on if I’m not going to be able to do anything when I’m blind?

“The vision has completely gone in my left eye now and I only have two per cent left in the right.”

Jim started receiving support from Blind Veterans UK in 2014 after finding about the charity coincidentally whilst on a holiday in Llandudno. He says:

“I remember being on the seafront and there were some people collecting donations. I donated and was asked if I am a blind veteran. I’d never heard of them so said no. They invited me up the road to the centre straight away and very quickly I became a member and it really did change my life.”

Jim was given training and equipment to allow him to adapt to his sight loss and continue to live independently. He says:

“I’ve been given a reader that blows documents up to a huge size as well as a special tablet computer that I couldn’t live without now. Even little things like the one cup kettle make a difference.”

Although Jim says that the social aspects of the charity are what make the biggest difference to him:

“I can’t even count the number of times I’ve been to stay at the Llandudno centre and I’ve made so many great friends there.”

Unfortunately, Jim’s wife passed away in 2011 and he is looking forward to spending Christmas with the friends he has made through Blind Veterans UK.

“If it wasn’t for Blind Veterans UK I would probably be spending Christmas alone. I have a wonderful stepson and daughter-in-law who visit me every week but they live quite far away and they know how much I’ll enjoy it in Llandudno.

“Blind Veterans UK really are a wonderful organisation and the fact that they’re still there for all of us at Christmas really shows that.”

Blind Veterans UK currently supports more blind veterans than ever before in the charity’s history, but it knows there are many more who still need its support to rebuild their lives following their sight loss. The charity has a dedicated community team in Cheshire who provide support including training, equipment and social events for vision-impaired ex-Service men and women in the local area.