Lieutenant General Richard Nugee, who devised the UK military’s strategy on climate change and sustainability has visited Antarctica to see for himself the growing effects of global warming, in a new Forces News short film, Climate Warriors: The Military’s Fight Against Global Warming, now on Forces News YouTube. 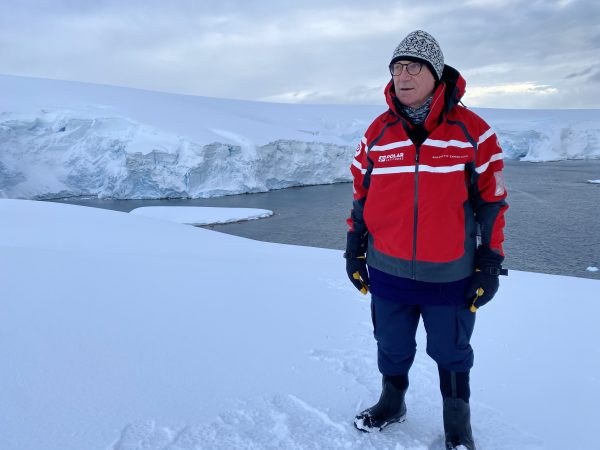 In the film, Forces News travelled with Lt Gen Nugee on his 9,000-mile trip, which also included supporting a team of veterans as they embarked on an expedition to carry out climate change research.

Lt Gen Nugee also visited numerous spots along the Antarctic peninsula, to hear first-hand from scientists how rising sea temperatures are affecting the ice and the continent’s rich wildlife.

Speaking exclusively to Forces News, the General said preserving places like Antarctica was a matter of national security.

“Seeing Antarctica like this, you realise that if this disappears it will have an enormous impact on the rest of the world.”

Nearly all the glaciers in Antarctica are melting, threatening the availability of Krill, small crustaceans that provide a vital food source for whales, seals, and penguins.

Temperatures on the Antarctic Peninsula have increased by three degrees since the 1950s, a rise five times faster than the global average. The ozone layer that covers the continent is also thinning, the result of greenhouse gases, raising the level of UV.

The UK military is the second biggest emitter within the public sector, generating 2.6 million tonnes of CO2 equivalent in 2019/20, the latest figures available.

Campaign groups claim the real figure is significantly higher as it does not include emissions from operations or the military’s huge supply chain.

In his report General Nugee argued that Defence will find itself involved in an increasing number of missions where the root cause is Climate Change.

As examples he points to how ISIS recruited farmers displaced by drought, and the UK military’s increasing role in the Caribbean helping communities affected by hurricanes.

He believes that in the long run, going green will increase the military’s capability and make the battlefield safer.

“The US military estimates it lost between two and 3,000 troops on logistic re-supply in Iraq and Afghanistan. We lost our most senior officer, a Lieutenant Colonel,” he said.

“If you can find a way of reducing the amount of logistic support that you need by thinking about sustainability, thinking about producing your own energy and water, then you’re saving lives at the same time.”