You are here: Home / News / News / ‘Colour Chaos’ participants race to save bedtime for Forces Children

‘Colour Chaos’ participants race to save bedtime for Forces Children 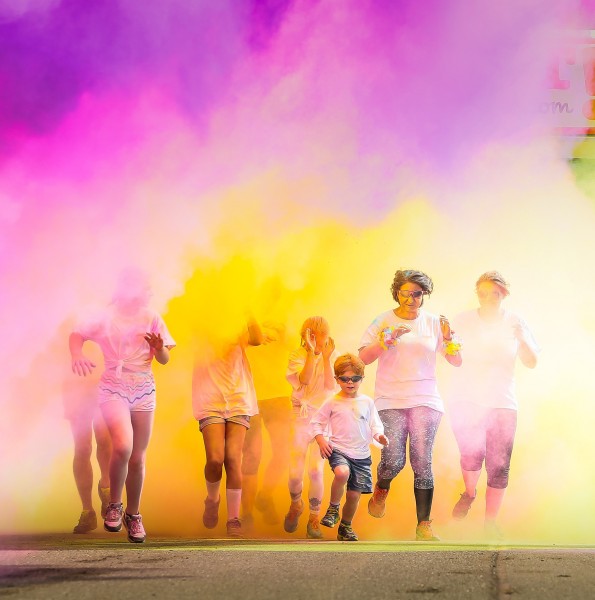 On 20 August more than 200 runners took part in the first ‘Colour Chaos’ run ever to be organised on an active RAF station. The unique family challenge, which was raising vital funds for the RAF Association, was held at RAF Wittering on the Lincolnshire/Cambridgeshire border.

The race took place entirely within the RAF station, and participants – who could choose to run, jog, dance or walk – were plastered in powder paint as they complete each kilometre of the circuit. Course highlights included passing the wood where Harriers used to take off and land, a Harrier and military vehicles parked along the route, and a turn round the compass swing (where aircraft compasses are calibrated).

The day was raising funds for the RAF Association’s welfare support work. Every £1 raised by runners will go towards projects that help members of the RAF family across the country.  One of these is the Storybook Wings initiative, where serving parents record their children’s favourite bedtime stories before going away on active service. It has been used by more than 2,300 families since its inception in 2009 and on average 400 stories are recorded each year.

Flight Sergeant Wayne Swiggs, a serving RAF dad who uses the Storybook Wings scheme, said: “It’s always tough being away from my family, so I’m glad that my sons are able to hear my voice through Storybook Wings. Funds raised through the ‘Colour Chaos’ event will help parents like me keep our young children happy and reassured during time spent apart.”

Rachel Huxford, Director of Fundraising and Training at the RAF Association, said: “This inaugural Colour Chaos event was a wonderful, fun-filled family day out in a unique location.  We thank everyone at RAF Wittering and all the volunteers including the Air Cadets for all their support.  We have had interest from other RAF stations who want to run their own – so we hope this will grow.”