With many Armed Forces Day events cancelled next month due to the pandemic, veterans’ mental health charity Combat Stress has come up with an exciting and tasty way for people to support the Armed Forces community and raise much needed funds at the same time. 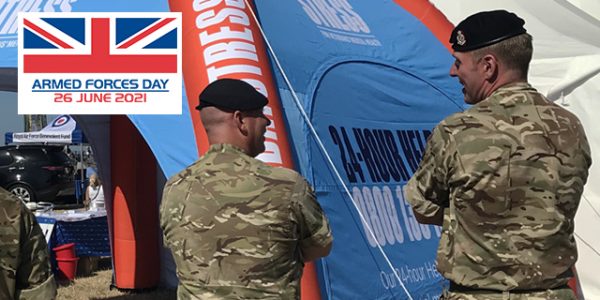 The ‘Battle of the Burgers’ pits burger recipes from the Royal Navy, Army and Royal Air Force against one another, with the public invited to host their own BBQ at home on Armed Forces Day (26 June) and decide the victor. Alongside the recipes, the BBQ pack from Combat Stress also features recipes for cocktails, bunting, cake toppers and an Armed Forces Day quiz and playlist.

The charity has ensured that the pack contains everything needed for a wonderful get-together with friends and family, whilst celebrating and thanking our incredible serving personnel and veterans.

The Armed Forces’ response to COVID-19 has been the biggest ever homeland military operation in peacetime with more than 5,000 personnel involved. Together with the NHS, military personnel have played a vital role in the Covid-19 vaccine rollout across the UK.

“This year’s Armed Forces Day is a great way of thanking our Forces – past and present – for the incredible work they have carried out and continue to perform for our nation.

“We strongly encourage people to celebrate the day, even if they are unable to attend an official event, and we hope our BBQ pack will give them all the tools to do so.”

For more information and to download the free ‘Battle of the Burgers’ BBQ Pack visit: https://combatstress.org.uk/blog/armed-forces-week

In previous years, Armed Forces Day event venues have often chosen to support Combat Stress as their chosen charity. The BBQ Pack offers tips on how to use your own event as an opportunity to raise funds for veterans’ mental health.