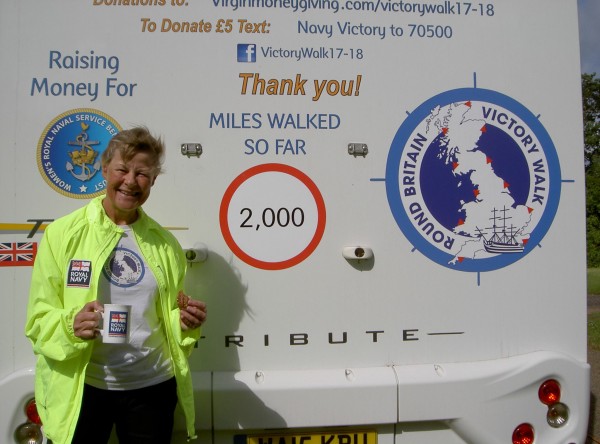 Commander Jane Allen set off from HMS Victory on 21 October last year, to walk anticlockwise round the coast of mainland UK to raise money for two naval charities, the WRNS BT and RNRMC charities. Here she provides an update on her most recent travels in Scotland where she has now clocked over 2,000 miles.

Having walked across the Scottish border at the end of April, it has taken me a further 664 miles to reach John o’ Groats, where the ‘bootometer’ clicked 2,031 miles. The magical 2,000 miles had been achieved earlier in the week on the approaches to Wick. Meanwhile, the Victory Van has already covered over double the mileage (4,696) in support.

The very words John o’ Groats (and Land’s End) sum up a certain sense of mystery and adventure. It is still the challenge many people seek.  Runners, cyclists and walkers probably top the bill, but there are those who elected for more unusual methods: roller skating, motorised supermarket trolley, tractor or horse-drawn carriage.  And probably someone has done it dressed as a banana!

This famous landmark is significant to the Victory Walker as it marked two things. Firstly, a change of walking direction – I’m now heading west along the top of Scotland.  Secondly, it was here eleven years ago I stood at the famous signpost with a feeling of trepidation: I was about to start my JOGLE (John o’ Groats to Land’s End) to raise money for the Poppy Appeal. On that 2007 journey I covered a distance of 1,200 miles.  Now, as I begin my second attempt to walk to Land’s End (not dressed as a banana!), my route will be indirect and far greater than 1,200 miles!

In the lead-up to reaching John o’ Groats there have been some good, bad and lovely moments.  As well as reaching John o’ Groats, another great moment was catching a seasonal ferry across the Cromarty Firth and resting my feet; the downside was rain, poor visibility and no view! A bad moment has to be hacking my way through jungle-like vegetation as I made my way up from Inverness on the John o’ Groats Trail.  These grim days were compensated by the ever-increasing warmth and generosity of the Scots, the further north I’ve walked. That’s been lovely.

Meanwhile, the support team (of 1) continues to loathe the laundrette trip (never has the correct denomination or number of coins required), with the weekly shopping ordeal coming a close second.  For me, trying to turn a double-sided map in a gale tops my misery list, quickly followed by getting drenched during the last hour of a walking day!

Every day is different and will continue to be so as I wend my way to Land’s End, where I look forward to the reward of a Great Big Cornish Cream Tea!

The Victory Walk is raising money for two naval charities, WRNS BT and RNRMC. To donate go to www.Virginmoneygiving.com/victorywalk17-18. To find out more about Jane’s Victory Walk go to www.victorywalk.uk