You are here: Home / News / News / Copper Kettle Tearoom brews up for SSAFA

Mark and Amanda Bennett – owners of the Copper Kettle tearoom in Grainthorpe, Lincolnshire – will throw open the doors of their new tearoom and craft centre on Sunday 19 September in support of SSAFA, the Armed Forces charity after they met the inspirational fundraiser Chris Lewis. 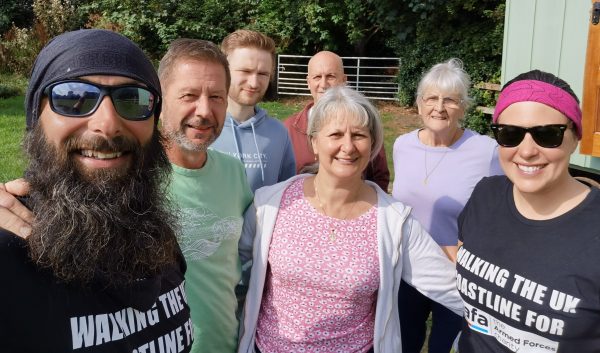 Chris, a former Para, set off in August 2017 from Llangennith Beach near Swansea with the aim to walk the entire coastline of the UK to raise money for SSAFA. Mark and Amanda were able to meet Chris on his epic walk while he was in Lincolnshire.

“We have been following Chris and Kate as they have walked the UK for the past two years via his Facebook page, and while we were on holiday, we read one of his posts highlighting the problems they face during the trip, such as washing clothes and showering.

“We gave them use of a shepherd’s hut with washroom and laundry facilities at home, and spent a few enjoyable evenings getting to know them, and this made us decide to have a pre-opening charity day for SSAFA.

“Although we don’t have any Forces background ourselves, my grandfather was the skipper of a minesweeper during the war, suffered from PTSD – of course this was not a recognised condition at that time – and subsequently he died from this.

“My Grandma and dad would not have made it through this time without the support they received from their local charity of the day, and this is why we’re so passionate about SSAFA.

Mark said that The Copper Kettle’s full menu will not be on offer on Sunday, adding:

“However, it will be a great opportunity for anyone to come along, have a brew and some cake, and support SSAFA.”