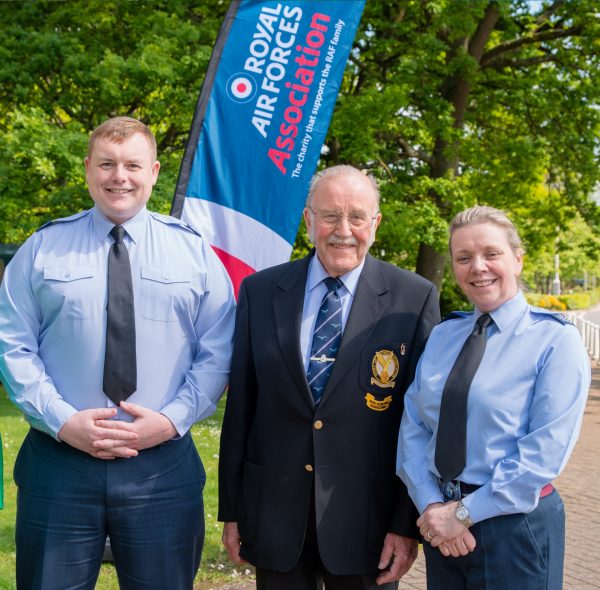 RAF Cranwell received the Lord Tedder Trophy for raising £19,078 for the charity’s Wings Appeal in 2018, the highest collection of any station in the country. Michelle and Ash, who are both RAF Association Liaison Officers (RAFALOs) at the station accepted the trophy.

“We put a lot of hard work into fundraising over the last year since I became Senior RAFALO, and despite being such a small team Ash and I did everything we could to raise more money than any other RAF station in the UK.”

Ash received the Wally Marriott Trophy as RAFALO of the Year. He said:

“Michelle and I ensured there was always something going on, from our Santa run to events with Cranwell Primary School. We also worked with the Association’s Cranwell Branch to help raise this great total for the charity.”

Mike Smith, Secretary of the Association’s Cranwell Branch, received a National Presidential Certificate for his 18 years of service to the charity, which supports the wellbeing of the RAF family.

“I’ve been very active in the Cranwell Branch since joining in 2001 – you have to keep the grey matter active once you retire, as I learned when I worked in resettlement!

“Ash and Michelle at RAF Cranwell managed to raise an incredible amount last year. Everyone at Cranwell Branch was proud to be involved, and this year we’ve got even more events planned.”

For more information on the RAF Association’s Cranwell Branch, including details on how to become a member of the Association, visit www.rafa.org.uk/cranwell

Whether it’s an injured airman or woman fighting to get back on their feet, a young child missing their parent away on overseas operations, or a World War II veteran needing a shoulder to lean on, we are here to help all generations of RAF personnel and their families. We also support serving families if they need us. We give practical, emotional and financial support.
Our membership of 74,000 includes serving RAF personnel, veterans and members of the public who want to show their support for the work that we do.