You are here: Home / News / News / Creative quartet cycles from Salford to Blackpool for military charity

Creative quartet cycles from Salford to Blackpool for military charity

Under blazing sunshine, a gallant group of cyclists from APS Group took part in a 60-mile ride from Salford’s Media City to Blackpool – and all in aid of SSAFA, the Armed Forces charity. 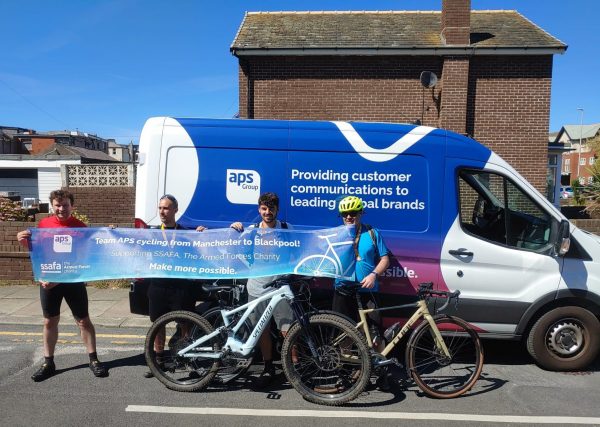 Explaining their reasons for choosing SSAFA, the creative quartet from APS said:

“SSAFA is one of our clients and we wanted to show our support, especially after meeting SSAFA volunteers and staff and hearing about the great work the charity does.

“While the sun and heat made for a slightly challenging ride, especially the last 10 miles or so when we all had to dig deep to keep those pedals turning, it was worth it because SSAFA is such a great cause.

“We set ourselves a target of £200, but have smashed it, raising more than double that amount allowing SSAFA to continue its work for serving personnel, veterans, and their families supporting them when, where, and how they need it.”

Donations can still be made at justgiving.com/fundraising/aps-group1, and as for future fundraisers for SSAFA, the APS staffers say “Watch this space!”

For more information, including how to fundraise, donate, volunteer, or access services, visit ssafa.org.uk.