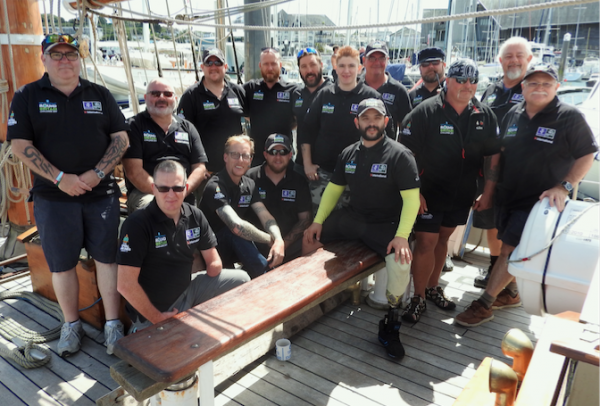 Crew and staff taking part in the Round Britain Challenge 2017

A team of veterans affected by military operations has swapped home comforts for two months of nautical endurance as they attempt to sail 2000 nautical miles around the British Isles.

Under blue skies the crew of 17 veterans – many with little or no sailing experience –  were waved a noisy goodbye to crowds of well-wishers at Falmouth harbour in Cornwall at 2pm on Saturday (August 5) on the Turn to Starboard Round Britain Challenge 2017.

The crew will spend eight weeks at sea circumnavigating Britain aboard a 92-foot tall ship, and the journey will see them sail around Wales and Scotland before heading down Britain’s East coast and a final leg back to Falmouth.

During the feat of physical, mental and emotional endurance, the crew will spend time learning to navigate Britain’s coastal waters along with everyday tasks such as scrubbing the decks, cooking in the galley and managing the huge sails by climbing the various masts and rigging.

The expedition has been organised by Turn to Starboard, a Falmouth-based sailing charity that helps hundreds of military personnel suffering with physical injuries or mental trauma by providing sailing courses in a supportive environment.

The expedition will be led by Turn to Starboard Sailing Instructor and former Royal Marine, Dan Fielding. After being medically discharged from the Royal Navy, Dan signed up for the charity’s ‘Zero to Hero’ programme and has gone on qualify as a Yachtmaster Instructor and skipper of the epic challenge. 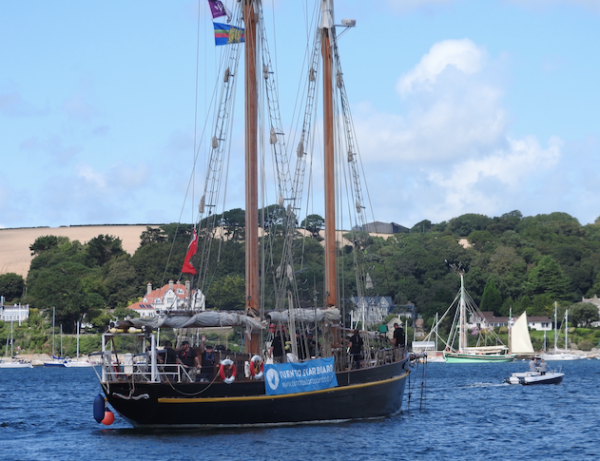 He said: “It’s great to see the sun shining on us today as we set off on this epic adventure. The aim of the Round Britain Challenge is to help participants re-engage, reintegrate and gain new skills while raising awareness of some of the challenges veterans can face after Service life. Some of the crew will be gaining valuable sailing miles as part of their training for Yachtmaster qualifications, whereas others have set themselves a personal challenge as they battle with their own issues after Service life. Many of the participants are seeking solace in the companionship of others who have experienced similar situations, which allows them to feel valued in a supportive environment. Wish us luck!”

The lead supporter of the initiative is The Endeavour Fund, which offers funding for sporting and adventure challenges and helps emerging initiatives with advice, hands-on support and mentoring. The fund plays an important role in ensuring that more servicemen and women have the opportunity to rediscover their self-belief and fighting spirit through physical challenges.

The charity is inviting the public to help them raise funds towards the cost of the expedition at uk.virginmoneygiving.com fund www.turntostarboard.co.uk/roundbritain.

Photo 1 caption: Crew and staff taking part in the Round Britain Challenge 2017

Photo 2 caption: The ‘Spirit of Falmouth’ sets sail on the epic Round Britain Challenge 2017