A couple from Haverigg have been working with local businesses to raise money for the charity that supports blind and partially sighted veterans, Blind Veterans UK. 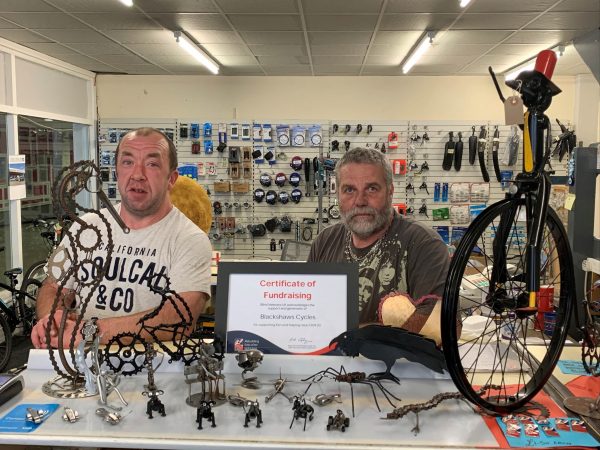 Ken and Lynne Wilkinson teamed up with Blackshaws Cycles in Barrow-in-Furness and Silecroft Golf Club, raising over £1,000 for charity.

“I’ve always felt a connection to the services. I used to look after the war graves at the local church but when I couldn’t do that anymore I started to look for a new cause to support. I came across Blind Veterans UK and I take great pleasure in raising money for those who have served and lost their sight.”

It was a chance encounter between Ken and 65-year-old Brian Edwards, manager of Blackshaws Cycles, that led to the shop raising money for Blind Veterans UK.

“Ken came to the shop asking if we had any scrap metal, saying he was going to make sculptures and sell them for charity. I couldn’t believe it when he mentioned Blind Veterans UK as they’re the charity that supported my father-in-law when he started to lose his sight.”

Brian handed over a selection of scrap metals and Ken got to work producing a variety of sculptures which could then be sold in the shop. Brian says: “I know my father-in-law hugely appreciated the support he received from the charity so I’m delighted to help out in any way I can. So far we’ve raised over £500 and we continue to sell the sculptures, they’re very popular.”

Ken and Lynne also got to know the Captain of Silecroft Golf Club, 57-year-old David Boyce. He says:

“My brother is in the Army so I’ve got a strong connection with the services. I can only imagine what the veterans who have lost their sight are going through. So when I heard from Ken and Lynne that they were raising money for Blind Veterans UK, I was happy to get involved.”

On top of this, over the last couple of years, Lynne has been knitting and selling poppies for Blind Veterans UK. In total the couple have raised over £6,500.

“We’re truly grateful to Lynne, Ken, Bryan and David for everything they’ve done to raise so much money for us. These vital funds will allow us to continue delivering life changing support to blind veterans up and down the country.”