A team of twelve amateur cyclists have taken on and conquered the Alabaré Race to the Sun, an epic 500km ride across Andalucía in southern Spain, encompassing 8,600m of climbs and category 1 ascents.  The team set off on Monday 16 May from Gibraltar, and completed the circular route on Friday 20 May, arriving back to a rapturous reception in the Royal Navy dockyard. 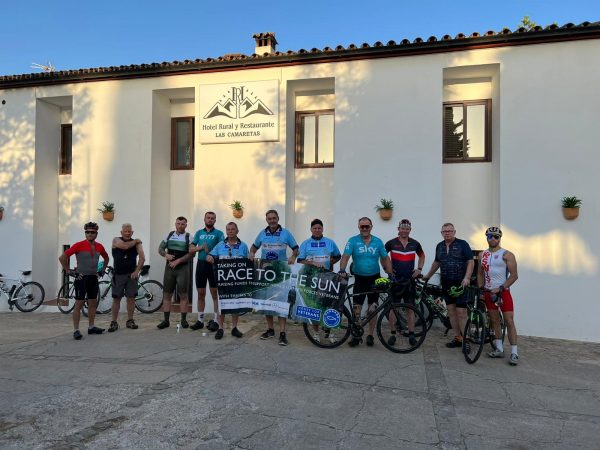 The riders were taking on the challenge in aid of the charity Alabaré, and their services supporting homeless or vulnerable Armed Forces veterans.  So far the teams’ incredible efforts have raised £42,000.

“This was an extremely demanding and difficult challenge and every rider rose to that challenge.  Blood, sweat and tears were left on the tarmac, every day.  Congratulations to all, not just for the ride but for their fantastic fundraising efforts as well.”

The twelve cyclists have come from across the UK, and a wide variety of professions, and varying degrees of cycling experience.  Over half the team are veterans themselves, including several from The Queen’s Regiment and Princess of Wales’s Royal Regiment. During the first day the cyclists stopped to remember the casualties of the Battle of Albuhera and held a silent toast “to the immortal memory”.

Along the course of the ride, the cyclists rode through beautiful towns and countryside around Algar, Cortes de la Frontera and Grazalema before spending their final night on the trail in historic Ronda, above the dramatic El Tajo gorge.

The stunning scenery could not distract however from the pain and exhaustion of the unrelenting climbs, with each rider pushing themselves to the limits (and beyond!) to reach the summit of the punishing ascents.

Day two included the ascent of Puerto del Boyar, which is a continual climb of 15kms.

At the top of the mountain Lee said;

“I’m putting my body for this for one reason and that’s to ensure that veterans less fortunate than myself find accommodation, care and love – that’s really important to me. We’ve just come up this really high gradient hill in about 30 degrees of heat – it’s a really tough gig with a great band of brothers, and wild horses won’t stop me.  Thank you so much from the bottom of my heart to all those who have already supported me.  A lot of people didn’t think I’d get up and do this, but I am going to prove them wrong – once a Queen’s man, always a Queen’s man.”

The challenging terrain led to some falls and near misses along the course, with one of the riders devastated at being forced to sit out part of the ride after sustaining an injury, before being able to re-join their team-mates.  The passion and determination of the whole team was testament their camaraderie and to how much they all wanted to complete the course to raise as much money as they could for veterans who are struggling in their civilian lives.

“This is not for me, it’s not about the effort, it’s about supporting people who’ve served, who need our help while we’re able to do it; a lot of people can’t. We’re doing this for them.”

The cyclist each have a fundraising page and are pleased to receive as many donations as possible.  You can sponsor them by going to www.justgiving.com/campaing/racetothesun

The Alabaré team would like to thank you to the organisations who helped make Race to the Sun including Marshall Mercedes, Ibex Insurance, Admiral Toolbox and Rebecca Day 360°.

Race to the Sun was held concurrently with the Alabaré Gibraltar Veterans Heritage project which saw nine veterans help renovate Lord Airey’s Battery at the top of the world-famous rock.  The heritage team included five veterans who have benefitted from the accommodation, support and training opportunities provided by Alabaré.