During Remembrance, a Normandy veteran is taking on the challenge of cycling 11km to honour our fallen heroes. 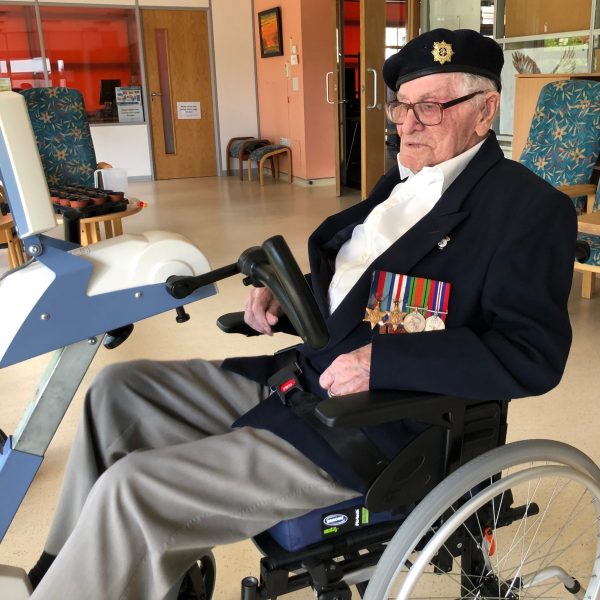 Len Gibbon, 97, will complete the distance over two days using a static bike to raise funds for Worthing-based charity, Care for Veterans.

Len is a resident at Care for Veterans, which provides care and rehabilitation to physically disabled ex-Service personnel and their families.

Len and several other resident veterans will cross the finish line on 11 November in a group physiotherapy session. They will be joining over 60 other participants in the virtual challenge ‘Race for Remembrance’, organised by the charity to help raise the funds needed to continue its work.

The charity receives no regular government funding and must raise over £1.5 million this year to provide its award-winning care to the veterans who live there.

Len came to live at Care for Veterans in December 2019, when he realised he needed extra help after having several falls at home and his walking had become unbalanced. He loves dancing, so the charity’s physiotherapists incorporate this into his sessions; he loves to do the ‘Cha Cha’.

Talking about his experience in WW2, Len said:

“There were plenty of us out there that did a lot more than I did. I was a Despatch Rider. I remember I was in Hamburg, all alone on my motorbike on the autobahn. The woods were alight, and ammunition dumps were exploding everywhere; when a Spitfire plane flies down so low it almost hits the ground, then pulls up, makes a loop, and when it comes back down, the pilot opens his cockpit and cheers. It was then I knew that war had finished. I stood up on my bike and cheered.”

To sponsor Len, visit justgiving.com/campaign/Len11k. Sign up for Race for Remembrance at www.careforveterans.org.uk/RforR, it costs just £15 and all participants will receive a medal.