You are here: Home / News / News / D Day Veteran Don Sheppard will be celebrating his 100th birthday on 4 May

The Taxi Charity for Military Veterans sends every good wish to one of its very popular veterans Don Sheppard, who due to COVID-19 restrictions will be celebrating his 100th birthday in lockdown instead of being the guest of honour at a birthday party for 140 friends and family. 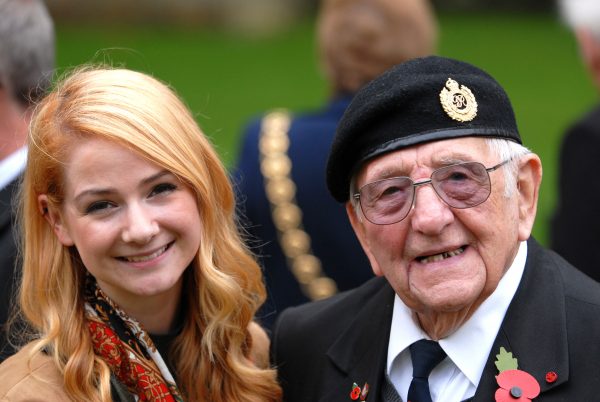 Don from Basildon was born in the village of Laindon in Essex on the 4th of May 1920. He lives with his wife of over 50 years Sandra and has three children, six grandchildren and four great grandchildren. Don is a Freeman of the City of Basildon and was the Chairman of the Normandy Veterans Association – Southend on Sea Borough

Don Sheppard with his Granddaughter Daisy

“As a family we would like to say how extraordinarily proud we are of Don. He is funny and quick witted if a little deaf! He always remembers to ask after each and every one of us and keeps track of school, college, university and work. He is quite simply the very heart of our family and we love him.”

“Don is a very popular member of the charity family and it is a real pleasure to spend time with this gregarious gentleman at the Taxi Charity’s annual summer visit to Worthing which he regularly attends. The Taxi Charity committee, volunteer cabbies and veterans would like to wish Don a very happy birthday and we look forward to celebrating with him when the COVD-19 restrictions are lifted.”

Don Sheppard, says of his background,

“Growing up in the 1920’s was tough. Dad was invalided out of his work in the London Docks and sadly passed away at the age of 46, from then on Mum was the bread winner until I left school at the age of fourteen and got a job with a local builder doing labouring work. From then, I had various jobs and became a “Jack of all trades master of none.”

My final job before being conscripted into the Army was hairdressing, in one of the local barbers’ shops. Like most young guys I was called up for service in the forces during WWII and aged 20 I joined the Royal Engineers and was sent to Colchester Barracks for training. I was then posted to 107 Field Company Royal Engineers and shipped out to North Africa, where my company joined the 51st Highland Division for landings in Sicily and finally we came back to Britain for D-Day. I landed on Juno Beach on 6 June 1944 with 151 Brigade Highland Division.”

Happy 100th birthday and thank you for your service.