The Taxi Charity was saddened to receive the news that one of their longest serving veterans, Ken Watts, had passed away on 22 August. 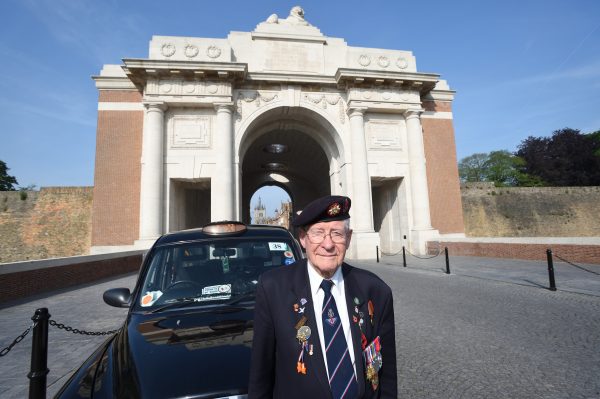 Ken Watts, 96, from Islington, served in 18 Platoon, D Company, 2nd Battalion of the Devonshire Regiment for four years during the Second World War. On 6 June 1944 he was amongst the thousands of men and women involved in Operation Overlord, landing on D-Day.

In 1947 Ken was demobbed and returned  to York Way Motors where he had started working in 1939. He was to work there for over 50years.

Ken was one of the longest serving veterans of the Taxi Charity family, a member of the  Islington Veterans Association and was involved with the London Taxi Trade, selling cab parts from the 1950’s until his retirement. Ken leaves behind his much-loved wife of ten years Eileen.

An officer who later served in The Devonshire and Dorset Regiment wrote,

“Ken Watts was one of the many brave men, who went ashore on D-Day, a member of 18 Platoon, D Company, 2nd Battalion of The Devonshire Regiment. The Battalion formed part of 231 (Malta) Brigade which had already taken part in the invasions of Sicily and Italy and was  specially selected by General Montgomery as one of the two “Spearhead Brigades” for the invasion of Normandy for its spirit and fighting prowess. Ken and D Company landed on GOLD Jig Red beach at about  0820, wading ashore through the dead and wounded, before reaching the comparative safety of the sea wall. Fighting forward during the day the Devons seized several key points, with Ken’s D Company taking two important German guns, an 88mm and a 75mm on the cliffs at Cabane, suffering dead and wounded all the way. The heavily defended chateau ‘Fosse Souchi’ produced delay and casualties until stormed by A and D Companies, later described as ‘something rarely seen in a shooting war’, ‘perfect, copybook examples of sound infantry tactics and leadership at company level’. The Battalion suffered thirty-five dead, and sixty-six wounded on D-Day alone. Later in the war the 2nd Devons were the first battalion to cross the Dutch frontier, ending their war deep inside Germany.”

“I know how much he valued the work the Taxi Charity did for all the veterans.  He was a great age and had a short illness before he passed away.”

“RIP Ken You have done your bit for all of us. I shall miss our chats on the phone. I shall see you when it’s my turn! God bless.”

“Ken was a very quiet unassuming gentlemen who had been part of our fundraising collection team since  the team was formed ten years ago and will be missed by everyone at the Taxi Charity.”