SSAFA, the Armed Forces charity in Dorset would like to pay its respects to Ernest (Ernie) Aylott, from Blandford, and thank him for his service to his country. 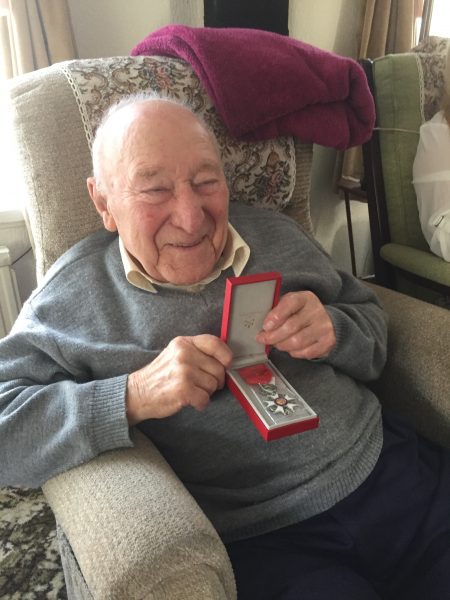 Having joined the Army in 1942, Ernie saw distinguished service in the war. He went ashore with 15 Parachute Regiment on D Day, landing on Sword Beach, and then moved on to Arnhem, scene of the famous bridge, to support Allied comrades battling the Germans.

As a D Day veteran, Ernie was entitled to the French Legion d’Honneur, France’s highest honour, as well as the 1939-1945 Star, the France and Germany Star and his 1939 -1945 War medals for the rest of his wartime service.

But when SSAFA were contacted by his family to explain that he had never received the medals, SSAFA Dorset caseworker, Nicholas Bate contacted the MOD to obtain them on Ernie’s behalf.

He also succeeded in replacing Ernie’s Parachute Regiment beret and badge, which he lost in Normandy.

Ernie was presented with the campaign and war medals by the Lord Lieutenant of Dorset, Angus Campbell, at a formal investiture at Blandford Camp in 2016, watched by his family and SSAFA representatives.

In a small ceremony at his home last year, Ernie was presented with his Legion d’Honneur by Nicholas, who read out the official French Government citation in English.

“Ernie had a fantastic war record and it was a privilege for us to be able to help him obtain his well-earned campaign medals and Legion d’Honneur.

“Ernie was a lovely man with an excellent sense of humour and strong values, and he was very proud of his service in the Second World War. He was a devoted family man and greatly loved by his wife Joan and sons Russel and Glen”.

Ernie was born in 1923 in Clapham, south London and enlisted into the Royal Army Service Corps in 1942, before transferring to the Parachute Regiment.

Once on Sword Beach, he drove lorries loaded with ammunition to supply the front line, continuing to advance through France until the end of the war and even being strafed by a Messerschmitt.

Ernie was demobbed in 1946 and went back to South London. He was involved the building trade, working on houses bombed during the Blitz, before moving to the Tate Gallery as an attendant and chauffeur.

Ernie met his wife Joan in 1947 and they had two sons, finally retiring to Blandford in Dorset.