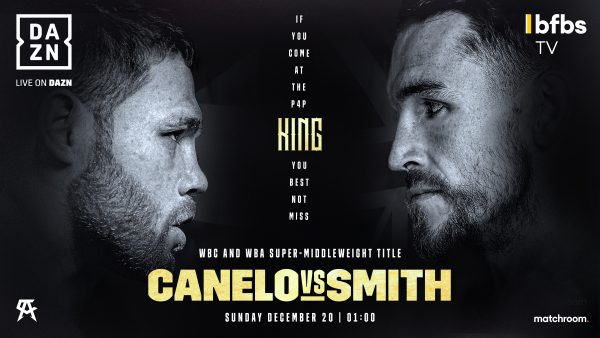 DAZN’s coverage of the fight will be available free of charge to the armed forces and their families currently serving in 20+ overseas territories on BFBS TV. The agreement is the first in an ongoing partnership that will roll out in 2021 to include additional fights and original content.

“DAZN’s goal is to make sport more accessible to fans around the world and that includes the UK’s armed forces communities serving overseas. Canelo Alvarez vs. Callum Smith is a must-watch fight for any boxing fan, so we’re delighted to partner with BFBS and bring this event to their network.”

“Title fights are always incredibly popular with the military community, so the partnership with DAZN is a fantastic boost to our BFBS TV entertainment offering for our armed forces posted overseas. We’re really excited to be able to bring this and future sports action to them, and to have such a valuable addition to our entertainment line-up.”

Canelo Alvarez’s much-anticipated return to the ring against Liverpool-born Callum Smith takes place on DAZN on Saturday, Dec. 19. Alvarez is back in action for the first time since knocking out Sergey Kovalev in November 2019 in Las Vegas to win the WBO light heavyweight title.

He will face tough opposition in the undefeated WBA super middleweight champion in Smith, who has defended the titles twice – stopping Hassan N’Dam in New York in June 2019 and then beating John Ryder in his hometown five months later.

BFBS is a military charity and broadcaster that entertains, informs, connects and champions the UK Armed Forces. BFBS has been broadcasting to the UK armed forces community for over 75 years, bringing the best of UK TV, sport, music and entertainment to forces and their families worldwide, wherever they may be stationed.