The course is a requirement for all Trustees, scuba instructors and divemasters selected to work as volunteers on the Deptherapy programme.  All Deptherapy Ambassadors are also required to undertake the course as are existing programme members identified as ‘Buddy Supporters’ in Deptherapy’s recently launched Buddy Peer Support scheme.

The MHFA course has four modules

We also discuss in some detail the stigma of mental illness.

Course members learn how to ASSESS an individual’s state of mind as follows:

Assess risk of suicide or self-harm
Listen non-judgmentally
Give reassurance and information
Encourage the person to get professional help
Encourage self-help strategies.

Those on the course learn how to assess the risk of an individual attempting to take their own life and the actions they can take to support that individual.

The course is run by Deptherapy’s Vice-President Richard Castle who served in the RAF as a Group Captain and is now a consultant specializing in burns, trauma and traumatic psychological disorders.  Richard was supported by Deptherapy’s chairman Richard Cullen and Board Member Andy Alfred.

The course was brought into sharp focus when a prospective programme member who Richard Cullen has been working with for some time contacted Richard to say there was no purpose to his life any more. The Samaritans were contacted and the immediate situation resolved.  Two days afterwards a programme member contacted one of Deptherapy’s Ambassadors and was talking about taking his own life as his life seemed meaningless.

“Deptherapy does an amazing job teaching diving but it’s more than that, it’s about maintaining the brotherhood of soldiers, it’s about someone being on the phone to help you ALWAYS 24/7.  It’s about giving injured individuals the opportunity to help each other and teach each other new skills. It’s not a one off trip it’s a continual commitment by the charity until we are no longer needed.”

Utilising best practice from Armed Services’ peer support schemes across the world Deptherapy developed its own programme and given the importance of the ‘buddy’ system in PADI scuba diving the team prefaced the scheme with the word Buddy. Richard Castle who is a huge supporter of the peer support schemes considers the Deptherapy model to be excellent, easily understandable and provides support for those appointed as ‘buddy supporters’.  The scheme was piloted in 2016 and was hugely successful.

This is the second MHFA programme that Deptherapy has held and will run further programmes when more team members need to be trained. 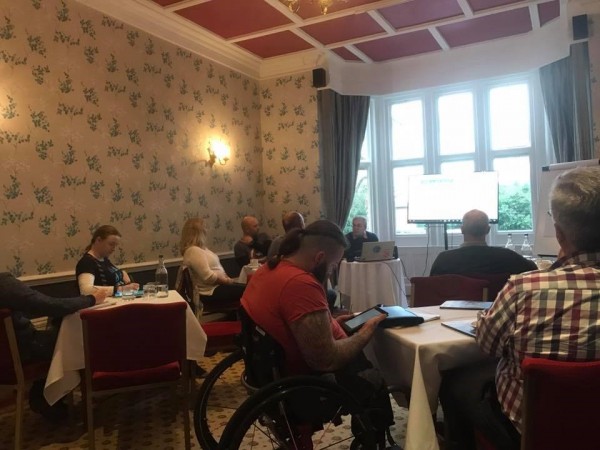