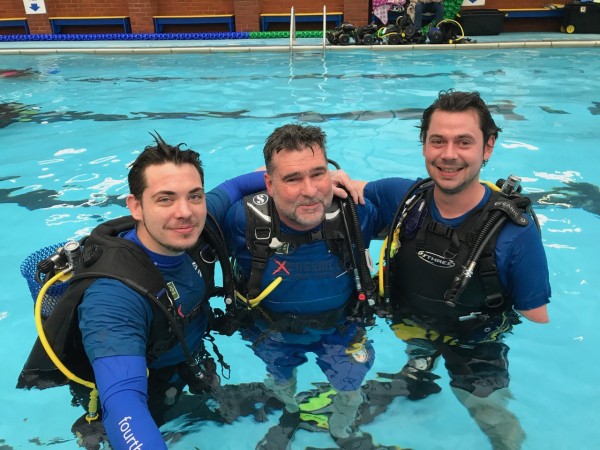 A team from scuba diving rehabilitation charity, Deptherapy, and PADI 5* dive centre Divecrew, have made a scuba diver’s wish for one, last dive come true this Christmas.

Colin Clements, 60, from Woodley, Berkshire, is suffering from an aggressive form of brain cancer that will take his life in the near future. Knowing he would be unable to dive again, Colin donated his diving equipment to Deptherapy so that other divers could be helped by his loss.

When contacting Colin to offer his thanks for this brave and selfless gesture, Richard Cullen, Deptherapy Chairman, was made aware that Colin had a dying wish to undertake one, last dive. Richard, and Martin Weddell, owner of Divecrew, enlisted Colin’s friend Daphne Pearson to help, and set about planning how to make Colin’s last wish come true.

Colin’s last dive took place on Sunday 17th December at Eagle House School, Sandhurst. The dive was kept as a surprise for Colin until the moment he arrived at the swimming pool.

Two Deptherapy Programme Members offered to accompany Colin on his last dive and travelled to Sandhurst from their homes in Banbury and Bristol:

Gary Green said: “As a new trainee Divemaster, it was a huge privilege to lead the dive and an absolute honour to dive with Colin. I hope through this dive, Deptherapy and Divecrew, have made Colin’s Christmas special and helped made his passing easier.”

Chris Ganley said: “I thought I had been through some difficult times, but being with Colin was humbling as he talked about his death and what this dive meant to him. I don’t think words can describe what happened this afternoon. It was all so dignified and respectful to be with a man who is facing death with such courage.”

Colin spent about 15 minutes underwater with Gary and Chris, before unfortunately, being overcome with tiredness. At times during the pool session, the emotion was overwhelming for everyone involved, including Colin’s friends who had come to support him and watch the dive.

Daphne Pearson said: “You only have to look at Colin’s face to know that you have made his dream come true. I couldn’t believe how quickly you managed to arrange all this, and to get some of the injured soldiers to dive with Colin has really touched us all.”

Colin couldn’t thank Gary and Chris enough for accompanying him on his dive. Sadly, Colin’s speech is already affected by his illness but smiling from ear to ear, he said: “Today I am very happy; I have dived. I couldn’t have asked for any more. Thank you all so much.”

BBC South coverage and video footage: BBC South filmed an interview with Colin, Daphne and Martin at Divecrew on Monday 18th December. This interview was broadcast on BBC News alongside underwater footage, shot by Stuart Green, during the dive.

Deptherapy & Deptherapy Education is an English Charity registered with the Charity Commission. It seeks to rehabilitate UK Armed Service personnel and veterans who have suffered life changing mental and/or physical challenges through specially designed scuba diving programmes. It also provides 24/7 support to programme members. Deptherapy is widely respected for changing the lives of those who come on the programme. Many programme members have suffered limb loss and or acute mental illness. 80% of programme members suffer from PTSD or other acute forms of mental illness. The charity also provides education in adaptive scuba diving techniques to dive professionals.

Divecrew: In addition to its PADI 5* status, is the UK’s only Deptherapy Gold Star Dive Centre; it is also Deptherapy’s UK base. Divecrew is situated in Crowthorne, Berkshire.  All of the Divecrew team have passed the Deptherapy Education Pros’ Course that trains scuba instructors to teach adaptively. Many of the team have also attended the Mental Health First Aid (MHFA) Course.The owner of Divecrew, Martin Weddell, is also an Instructor Trainer for Deptherapy and a member of the Deptherapy Board.