You are here: Home / News / News / Derbyshire blind veteran keeping connected with other blind veterans during lockdown thanks to charity’s National Creative Project

A blind veteran from Derbyshire has been joining other veterans virtually to get involved with woodturning, woodwork and mosaics during the lockdown period thanks to Blind Veterans UK, the national charity for vision-impaired ex-Service men and women. 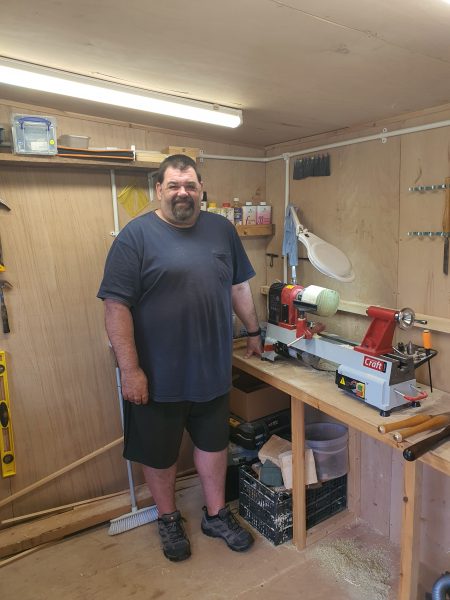 The National Creative Project has been created by the charity to keep veterans connected and to prevent them from feeling isolated during the lockdown period. The project focuses on creative activities and allows their veterans to get involved with different hobbies such as gardening and painting, from the comfort and safety of their own home. These activities would normally be available at the charity’s training and rehabilitation centres in Brighton and Llandudno. Veterans are invited to virtual-get-togethers with other veterans who have similar interests over telephone or video call.

Gary Stevenson, 54 and from Derby, has been involved in the project since it was launched in September. He says:

“I was first introduced to woodturning before the COVID-19 pandemic at the charity’s Llandudno centre. When I first heard about this project, I knew that I wanted to get involved in the woodturning and woodwork groups as I had missed visiting the centre and talking to other members with similar interests. With the closure of the centres, it’s great to be able to do this virtually. We’ve never had anything like this before – I’m talking now to veterans from all over the UK on a regular basis and we’re giving each other hints and tips”.

Gary served in the Army, in both the Royal Engineers and Royal Corps of Transport. He lost his sight due to meningitis and became a member of Blind Veterans UK in 2015. He volunteers for the charity as an IT helper and helps veterans who are new to the charity to settle in. He says:

“I spoke to a veteran recently who had just joined, and he told me about how he used to love painting but threw away all his tools when he lost his sight. I told him about the National Creative Project and encouraged him to join. The other veterans have so much advice to give on how to adapt your technique for your sight loss and we encourage each other to try new things. Just because you’ve lost your sight doesn’t mean you can’t still do these activities”.

The different creative activities within the project are accessible for all abilities. The charity sends out kits and instructions with everything that the veterans need for their chosen project. Gary says:

“It was through the woodwork group that I decided to give mosaics a try. I had been speaking to a veteran called Sue in the woodwork group and giving her some tips because she was new to the craft. She encouraged me to start mosaics as this was something that she was interested in. It wasn’t something I would normally try but I thought I’d give it a go. I was sent a kit with cutters and some mosaic tiles – it’s been very straightforward for a beginner!”

“There is a lot of evidence that creative activities play an important role in improving health and well-being. We thought it was very important that we could continue to provide this virtually for our members especially during such a challenging time”.

The project has not only encouraged many veterans to learn a new skill, but it has also been a great support for those who would have otherwise felt isolated during the lockdown period. Gary says:

“It doesn’t matter if veterans don’t have access to a computer, you can join the calls via telephone. We all have each other’s numbers and often call each other outside of the organised group calls to see how everyone is getting on. I really hope this can continue after the lockdown, as it’s given us a sense of community and been a great way to meet other blind veterans”.