You are here: Home / News / News / Derrick gets VIP treatment as he turns 95

Derrick gets VIP treatment as he turns 95 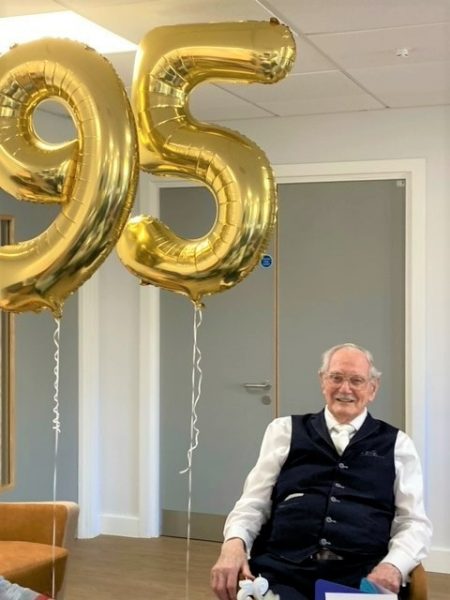 Salford City Mayor Paul Dennett was touring the new facilities at the care home and made sure he was able to wish widower Derrick a happy birthday in person.

The Mayor was accompanied on his trip by Joanne Farrell, head of the City Mayor’s office and Salford Council’s armed forces lead officer.

Derrick’s memorable celebrations included a visit from his family, and the home marked the special occasion with a party for residents and staff and a screening of one of his all-time favourite movies, Seven Brides for Seven Brothers.

Derrick, who is from Salford, moved into Broughton House last summer after toppling from his electric scooter and breaking an ankle. He is one of its oldest residents.

“Derrick has been a major figure in our home since he joined last year, taking a lead role with our Remembrance Day ceremony and always being a delight with our staff and fellow residents.

“We were extremely pleased to be able to make this a birthday to remember for him. He truly embodies the spirit of Broughton House.”

Derrick was too young to serve in the armed forces before the Second World War so, in 1943 at the age of 15, he joined the Home Guard and was attached to the Manchester Regiment and then the Lancashire Fusiliers.

Having previously been a Sea Scout, he volunteered to serve in the Merchant Navy and his mother reluctantly agreed to let him go to sea at the age of 16.

Derrick set sail in February 1944 as a crew member on the ocean-going passenger liner the RMS Orion, which had been refitted to carry 7,000 troops on wartime service.

In the run-up to D-Day, Derrick and his comrades ferried US and Canadian troops across the Atlantic to Liverpool for the invasion of Europe. Derrick manned one of the anti-aircraft cannons after undergoing a ‘crash’ gunnery course with the Royal Navy. He had a brush with death while embarking troops in New York, when he was overcome by fumes in the ship’s paint locker and was rushed to hospital.

After D-Day, the RMS Orion continued to sail all over the world, ferrying troops to Malta, then from Egypt to Naples, and back to the UK. After hostilities ended, the ship ferried survivors back to North America, Australia and New Zealand.

When the ship was returned to its owners in 1946, Derrick stayed at sea aboard other merchant vessels before coming ashore in 1948 because his mother had become ill. Derrick, who has four service medals, was later a fireman for 25 years and had spells working for the probation service and the Ocean Yacht Club charity.

A widower since May 2017 when Marjorie, his wife of 66 years, passed away, Derrick has a son and a daughter, three grandchildren and one great-grandson.

“I was honoured to visit Broughton House Veteran Care Village to celebrate Derrick’s 95th birthday and see the fantastic job that has been done in building their new state-of-art facility to care for veterans and their families in our city.

“Derrick epitomises the true spirit of Salford, working tirelessly for many years to make Salford’s Remembrance Sunday event the success it is today.  I know that Derrick is enjoying life at Broughton House and continues to organise special events much to the delight of residents.

“I was also delighted to meet some of the other residents and members of staff who have undertaken a sterling job over the past couple of years providing care and services to residents of Broughton House during the COVID-19 pandemic, whilst also juggling the challenges of transitioning to a new building.

“It really is fantastic to see facilities like this being built in our city to care for veterans and their families, building on Broughton House’s long-standing commitment since 1916 in caring for those who have served our country. I look forward to continuing to work with this great and much loved institution as we collectively continue our work to support our veterans, armed forces community and their families.”