A plucky 94-year-old has moved into Broughton House Veteran Care Village after toppling from his electric scooter and breaking an ankle – and is vowing to ride again once he has fully recovered. 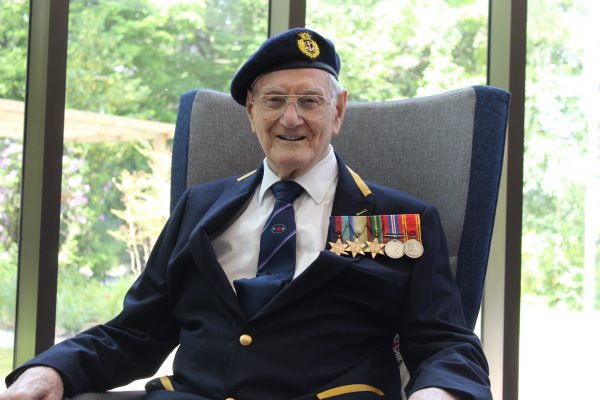 Derrick Corfield was riding along Agecroft Road in Swinton, Greater Manchester, when he hit a kerb and was thrown off. He suffered a head injury, and the next day was found to have broken his right ankle.

Until the accident, Derrick had been living in nearby Irlams o’ th’ Height but it was felt afterwards that it was the right time to be in a more supported environment. He has now settled in at Broughton House in Salford, the UK’s first veteran care village.

“The accident hasn’t put me off riding my scooter. I’ll take precautions next time and if I see a heavy kerb I’ll turn round and go back.

“I’m being well looked after at Broughton House, and that’s the main thing.”

Derrick was too young to serve in the armed forces before the Second World War so, in 1943 at the age of 15, he joined the Home Guard and was attached to the Manchester Regiment, then the Lancashire Fusiliers.

Having previously been a Sea Scout, he volunteered to serve in the Merchant Navy and his mother reluctantly agreed to let him go to sea at the age of 16.

Derrick set sail in February 1944 as a crew member on the ocean-going passenger liner the RMS Orion, which had been refitted to carry 7,000 troops on wartime service.

In the run-up to D-Day, Derrick and his comrades ferried US and Canadian troops across the Atlantic to Liverpool for the invasion of Europe. Derrick manned one of the anti-aircraft cannons after undergoing a ‘crash’ gunnery course with the Royal Navy.

He had a brush with death while embarking troops in New York, when he was overcome by fumes in the ship’s paint locker and was rushed to hospital.

After D-Day, the RMS Orion continued to sail all over the world, ferrying troops to Malta, then from Egypt to Naples, and back to the UK. After hostilities ended, the ship ferried survivors back to North America, Australia and New Zealand.

When the ship was returned to its owners in 1946, Derrick stayed at sea aboard other merchant vessels before coming ashore in 1948 because his mother had become ill.

Derrick, who has four service medals, was later a fireman for 25 years and had spells working for the probation service and the Ocean Yacht Club charity.

A widower since May 2017 when Marjorie, his wife of 66 years, passed away, Derrick has a son and a daughter, three grandchildren and one great-grandson.

He arrived at Broughton House last month. Derrick knew one of the volunteers at the home, and several residents whom he had met at the Salford Veterans Breakfast Club.

Speaking during Armed Forces Week, which runs until Sunday, June 27, Derrick said a job with the armed forces is a worthwhile career.

“It’s good to serve the country,” he said.

“If young people are so inclined, it’s a good job to have. I enjoyed it while I was doing it.”

“Derrick is well-known in Salford, having shown a sense of duty throughout his life in the city, not only in the forces but also in the local community.

“He epitomises the bravery, tenaciousness and zest for life of his generation. We’re delighted that he has decided to join our veteran community here at Broughton House.”