Don’t get in a pickle – join the RAF100 Cookbook high-fryers! 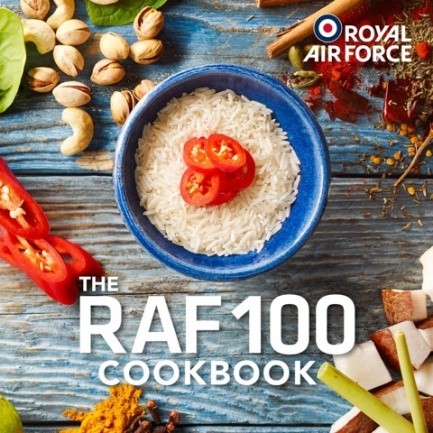 No need to wing it when it comes to creating a culinary masterpiece – get yourself a copy of the RAF100 Cookbook instead!

Researched, cooked, photographed and written by current or former servicemen and women, and dedicated, non-serving enthusiasts, the countries visited have all hosted an RAF presence in some way since the Service was founded in 1918.

The collection of 100 recipes have been put together in celebration of the Service’s centenary next year and will take the diner on a journey through 100 different countries to sample 100 delicious dishes.

Each authentic recipe is served with a side dish of history of the RAF’s involvement in the region, adding a little spice to the book and making it a tasty thread before and after dinner.

The book’s co-creator Flt Lt Crispin Chapple explains a little more. He said: “The book has been a real labour of love for myself and JP [Sqn Ldr Jon Pullen] which has taken more than four years and more than 100 tastings to complete! But we are delighted with the way the project has turned out – alongside our amazing, award-winning Chef, ex-FS Stu Harmer, come some of the world’s top chefs to serve up a real treat for food lovers.”

There are contributions from household names like James Martin, Tom Kerridge and Cyrus Todiwala, plus ex-RAF chefs such as Rachel Humphrey, Executive Chef at Le Gavroche, and Graham Howarth, now Head Chef at Chequers.

A donation from all sales will be made to the RAF100 Appeal supporting the RAF Benevolent Fund, RAF Association, RAF Charitable Trust, RAF Museum and the Royal Air Force.

English bread and butter pudding is the epitome of simplicity, but there are a few pointers to make it perfect. The bread should be stale, not fresh. White bread can be substituted with brioche, fruit loaf or left-over panettone at Christmas. Fruit can be soaked in rum, brandy or a liqueur, such as Cointreau, and should be layered in the pudding and not sprinkled over the top. Before baking, the buttered bread should soak up the vanilla-flavoured custard prior to topping up with a final layer of custard. It can be baked as it is, but cooking in a bain-marie allows it to cook and set evenly.

To serve
Good quality vanilla ice cream, fresh egg custard or a bit of both