A blind veteran from Poole in Dorset has been selected to represent the UK at this month’s Invictus Games. 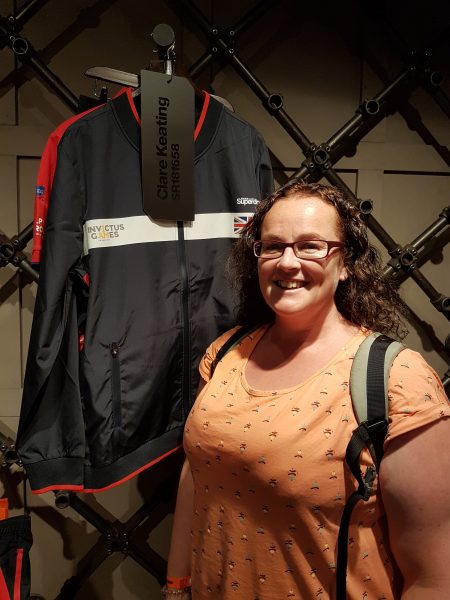 Clare Keating, 41, will be competing in power lifting and indoor rowing and is the only vision-impaired competitor from the UK taking part this year. The annual international sporting event for injured Servicemen and women is being held in The Hague from 16 April.

“After losing my sight and being medically discharged from the RAF I was left devastated.

“I lost my friends, my home and my career. I found myself having to start again and I didn’t think anyone would want to employ me.

“I no longer felt part of society.”

Five years ago, a friend of Clare’s had been selected to take part in the 2017 Invictus Games in Toronto and Clare joined her at a training camp for the event.

“I met a fellow blind veteran at the camp and I was inspired. I realised I still had a lot to give and decided I would train for a future Invictus Games.

“I’ve been training hard and I’m feeling confident. The Invictus Games has helped me to believe in myself more and I’ve come on so far both physically and mentally.

“My children see that I’m walking taller and prouder and they love it.”

Clare joined the RAF in 2001 and served at RAF Odiham as a propulsion technician.

The senior aircraftsman was medically discharged in 2007 after losing her eyesight due to punctate inner choroidopathy, a degenerative condition.

Clare has no vision in her left eye and limited central vision in her right eye which she describes as being distorted as though looking through washing up liquid.

Clare saw an advert for Blind Veterans UK and decided to get in touch with the charity who has been supporting her ever since.

“Blind Veterans UK has always been there when I’ve needed them and helped me to regain confidence in the activities I love. I am a member of the Military Wives Choir and the charity has provided me with a magnifier which helps me to view the song sheets.

They’ve also given me equipment to make me life easier around the home including special chopping boards and extra lights to brighten up the worktops.”

Clare isn’t going to rest after the Invictus Games and is already planning to take part in more power lifting competitions and a marathon.

Blind Veterans UK supports thousands of blind veterans across the country, but knows there are many more out there who still need its support to rebuild their lives after sight loss.

If you think that you, or someone you know, could be entitled to Blind Veterans UK’s free support, call 0800 389 7979 or visit blindveterans.org.uk/support