Dr Zbigniew Pełczyński OBE (Zbig), 93 and from Barton-on-the-Heath, was presented with an Honorary Fellowship for research and innovation by Blind Veterans UK at a prestigious ceremony held at Pembroke College, Oxford.

Blind Veterans UK’s Expert Advisory Group voted unanimously to induct Zbig as the first Honorary Fellow because of his outstanding contributions to research and innovation within welfare and social sciences. 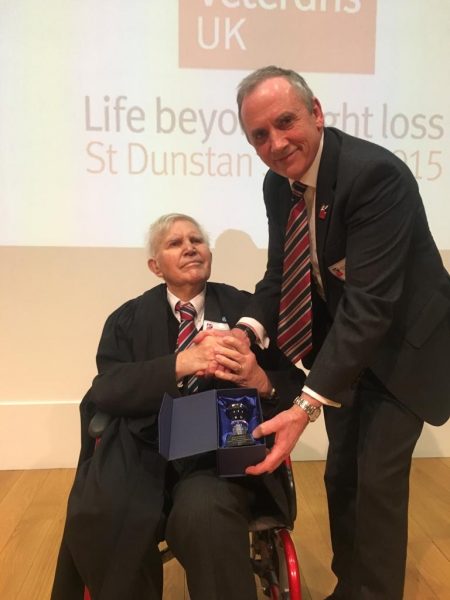 As an Honorary Fellow, Zbig will contribute to the development of research relevant to blind veterans and wider society.

Zbig was born in Grodzisk Mazowiecki, Poland, and fought in the 1944 Warsaw Uprising where he was taken prisoner by the Germans. After liberation from a camp near Bremen, he joined the Polish first armoured division under British command, and because of this was able to receive a grant to study in Britain.

After completing his DPhil thesis at Oxford University on Hegel’s minor political works in 1956, he was elected a Fellow of Pembroke College Oxford and lecturer in politics. His subsequent publications made him a world authority on Hegel and resulted in Visiting Professorships and senior scholarships at six foreign universities, ranging from Harvard to Jerusalem, Australia and Japan.

After 1956, Zbig made regular visits to Poland and was instrumental in developing several programmes for the education of students from communist Europe at Oxford.

In the United States, Zbig is known for having been the politics tutor at Oxford University for the Rhodes Scholar and future President Bill Clinton, among a host of other American politicians and senior business people. Other famous students include prime minister of Hungary Viktor Orbán, former Polish Minister of Foreign Affairs Radek Sikorski and journalist and biographer Walter Isaacson.

In 1994, Zbig founded the School for Young Social and Political Leaders in Warsaw. The organization, which subsequently changed its name to the School for Leaders Foundation, states as one of its goals ‘creating social capital based on leadership’. The organisation is going to celebrate its 25th anniversary this year.

Blind Veterans UK have always been at the forefront of adaptive technologies and have a long history in research, having been instrumental in the creation of the talking book in 1916 and long cane in 1965.

The research department opened in its current form in January 2017, looking at developing resources to effectively reverse the effects of blindness, focusing on three main areas: biomedical research, social and welfare research and innovation. Current projects include early intervention for macular degeneration, the relationship between traumatic brain injury and sight loss and the link between dementia and visual impairment.

Zbig says: “It’s a great honour to have received this Honorary Fellowship from Blind Veterans UK at this late stage in my life. I’ve benefited a lot from the support from the charity so I’m delighted to be able to give something back. The guidance I’ve had from the Rehabilitation Officers on adapting my home to make sure I can continue to live there has been invaluable.”

Dr Renata Gomes, Head of Research & Innovation at Blind Veterans UK, says: “We are absolutely delighted to have Zbig joining our department as an Honorary Fellow. His background in social and political innovation speaks for itself and I’m looking forward to working with him on our exciting projects.”

Blind Veterans UK currently supports more blind veterans than ever before in the charity’s history, but it knows there are many more who still need its support to rebuild their lives following their sight loss. The charity has a dedicated community team in Oxfordshire who provide support including training, equipment and social events for vision-impaired ex-Service men and women in the local area.