A team of four aircraft technician instructors of No. 238 Squadron, RAF Cosford, have set themselves the challenge of pulling a Jaguar – renamed “The Draguar” for this event – aircraft 238 metres along the airfield’s main runway on Wednesday 27 October to raise funds SSAFA, the Armed Forces charity. 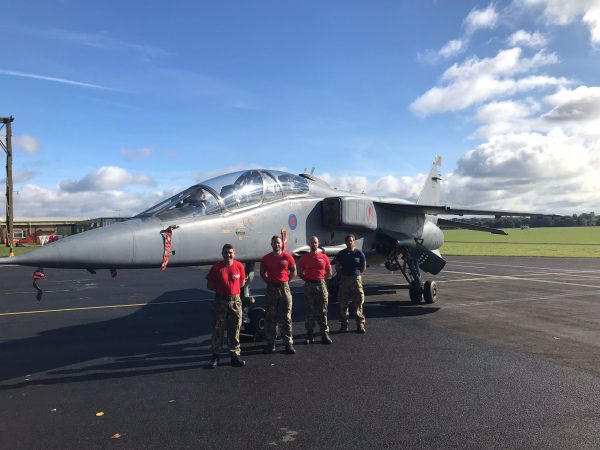 Draguar is the brainchild of Sergeant Mark Caddy, who has 14 years’ service the in the RAF, the team consists of Corporals Gary Courtman, Gaz Davies, and Grant Huxham, and Flight Lieutenant Bryn Mullard. They will be accompanied by support staff during the event who will act as brake man in the cockpit and chock men for the main wheels in the event of an emergency.

Retired from RAF service in 2007, the Jaguar GR3 has an all-up operational weight of approximately 11,000 kilogrammes (around 10 tons), and can fly at more than 1,000mph, although the team of RAF instructors do not expect her to reach quite such dizzying speeds on October 27.

“We decided to do this for SSAFA because it’s such a worthy cause and provides vital support to the whole Armed Forces community.”

Sgt Caddy added that his squadron has thrown down the gauntlet to others, saying:

“We picked a distance of 238m to drag this Jaguar in recognition of our squadron, but perhaps other squadrons – and I’m thinking of 7644 Squadron RAUXAF – might like to pull her 7.644 kilometres…”

Donations can be made by visiting justgiving.com/fundraising/238jagpull.