The Duke of Cambridge has launching a groundbreaking new award programme run by SkillForce in his name today [March 1st 2017] to help schoolchildren build character, confidence and resilience.

The SkillForce Prince William Award is the first award scheme of its kind. Delivered by the national education charity SkillForce, it targets younger children from six-years-old as well as teenagers.

Aimed at six to 14-year-olds, the award programme draws on the expertise and skills of predominantly ex-Services personnel who work as SkillForce instructors.

Thirty-seven primary and secondary schools, involving more than 1,000 pupils, have been piloting the one-year programme since the start of this academic year. 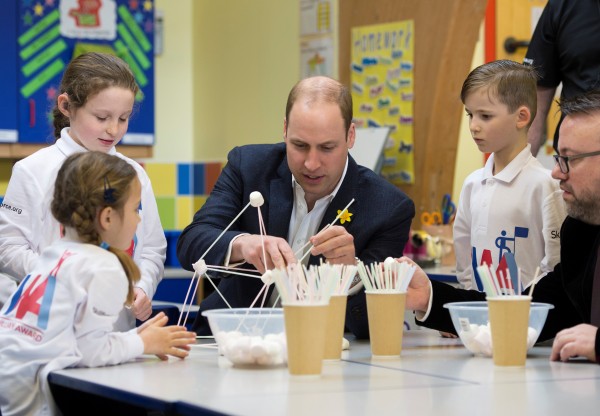 During the visit, The Duke took part in three of the award programme activities involving 80 pupils from three schools that are completing the pilot this academic year. The activity sessions comprised:

Ben Slade, Chief Executive, SkillForce, said: “We are thrilled to launch the Prince William Award, a pioneering new programme and the first of its kind, which will help children and young people build character, resilience and an inner strength for life. I want to thank The Duke for his fantastic support.”

He added: “Character attributes can be developed in children and young people, given the right mentoring. Our ex-Services personnel, who work as instructors in schools, inspire children and young people to dare to be their best selves. Developing personal skills is as valuable as academic study, given that character traits such as courage, cooperation, listening and problem solving can affect academic performance, psychological wellbeing and job success later in life.” 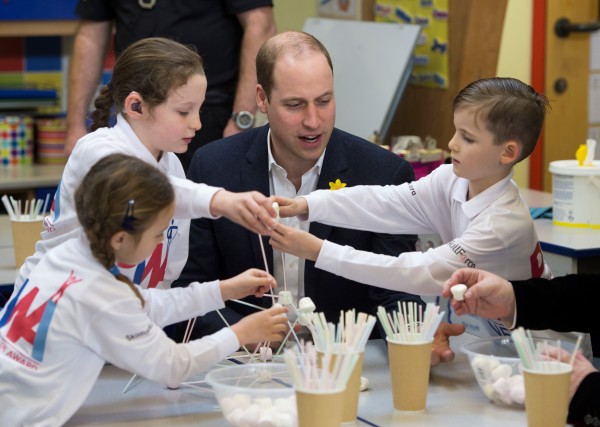 The one-year programme will start in primary and secondary schools this September 2017, following on from the pilot that began at the beginning of this academic year. The award combines practical and reflective learning through classroom-based and outdoor activities to develop character, resilience, compassion, courage, teamwork and problem solving skills.

The scheme is suitable for all children and young people including those at risk of social exclusion. In addition to team tasks and practical challenges, pupils and students receive feedback from instructors that encourage them to reflect on their actions and experiences, and consider how they would behave differently next time.

Jon Murphy, Headteacher of Llanfoist Fawr Primary School in Abergavenny, Monmouthshire, said: “We are honoured to host the launch of the Prince William Award programme which is preparing our pupils with the skills they will need to succeed in education and adult life. We have seen huge benefits from taking part in the pilot this year. Our pupils have greater self confidence, independence, problem solving and listening skills, and attendance has improved. Our pupils can barely contain their excitement at meeting Prince William and demonstrating some of the skills they have developed.”

Susan Gwyer-Roberts, Headteacher of Caldicot School in Caldicot, Monmouthshire, and a SkillForce ambassador, said: “Caldicot School has been a long standing supporter of SkillForce, and so it is incredibly exciting for us to meet Prince William. The charity’s work is transformational, and the instructors are great role models. We’ve seen students previously shy and wary of speaking up being willing to give a group talk and others who were lacking in self belief succeeding in ways they didn’t think were possible. SkillForce inspires our students to persevere and succeed, and we are proud to be part of the Prince William Award pilot this year.”

Emma Lindsay, Headteacher of Bishopstone Primary School in Bishopstone, Swindon, Wiltshire, said: “It’s an amazing, once in a lifetime, opportunity for our pupils to meet Prince William and certainly an experience that I am sure they will remember for the rest of their lives. Schools need to prepare children from a young age to thrive in a rapidly changing world and educate them on how they relate to themselves, others and their communities. That’s the great thing about the Prince William Award programme, and it’s fantastic that it is reaching primary school pupils at an early age. It teaches them key skills that, once instilled, will remain with them for life from first aid to in-depth problem solving.”

Abigail Squirrell, aged 10, from Llanfoist Fawr Primary School, said: “I was so excited about meeting Prince William. I think it’s very good that he’s involved and met the children, so he can understand how the award is helping them. I feel a lot more confident. I didn’t used to put my hand up in class to ask questions or give answers but now I am fine about speaking up and leading some of the activities.

She added: “I really like the challenges because they help you cooperate and work together as a team. We also have a check in at the start of the sessions where we get to say how we are feeling. That’s really important because if you are feeling a bit sad, then others will comfort you and show kindness. We are also asked to think about what we have learnt from the sessions and how we have put those things into practice during the week.”

James Morris, aged 10, from Llanfoist Fawr Primary School, said: “I really enjoy the SkillForce sessions. We play fun games, like hover ball, where we have to work together as a team and that’s helped me feel a lot more confident in class. The Prince William Award is a great idea and it is amazing that we got to meet him.”

Keaton Oliver, aged 12, from Caldicot School, said: “It was so exciting to meet Prince William, a once in a lifetime opportunity, and I got to shake his hand. Doing the SkillForce activities has helped me become a better person, and they are really fun. I’ve learnt how to better cope with my feelings, and express myself. I feel more confident and resilient. I am okay about speaking up in a group now whereas before I used to be a bit shy of doing that.”

Megan Connolly, aged 11, from Caldicot School, said: “It is really fun doing the SkillForce sessions and it was very exciting seeing Prince William. We do challenges where we have to work in teams and solve problems. I think the award is a good idea, it’s made me feel more confident in everyday life and lessons.

The award has been developed with education experts including the Jubilee Centre for Character and Virtues at the University of Birmingham, and is supported by investment company Standard Life.

Character education, according to the Jubilee Centre for Character and Virtues at the University of Birmingham, helps children and young people develop positive personal traits and strengths called virtues. It is the development of good sense or practical wisdom, and it involves knowing how to choose the right course of action.

Character education is also about helping students grasp what is ethically important in situations and knowing how to choose the right course of action in difficult situations. It grows from the experience of making choices and from ethical insight. For more information, visit http://jubileecentre.ac.uk/

Professor James Arthur, Director, Jubilee Centre for Character and Virtues, University of Birmingham, explained: “The Jubilee Centre at the University of Birmingham is very proud to be the academic partner for the Prince William Award. The award focuses on character and the essential virtues that help children to flourish and we expect it to become a rite of passage for all 6 to 14-year-olds.”

Sir Gerry Grimstone, Chairman of Standard Life PLC, said: “By tapping into the unique experience and skills of ex-service personnel, SkillForce is helping young people to develop and build greater resilience in life. The Prince William Award is set to transform the lives of those who take part, by allowing them to access a unique programme of coaching to help establish the values and principles that they will take forward in their future endeavours. Today’s launch by His Royal Highness is recognition of the inspiration provided to so many young people by SkillForce’s work, and we are incredibly proud to support them.”

Interim research findings from the pilot show that targeting younger primary school pupils is very popular with schools. Teachers at both primary and secondary schools, across all key stages and settings, have noticed substantial changes to behaviour, attitude and skills in particular confidence, communication and the ability to work with others.

A transcript of The Duke’s speech is due to be published here https://www.royal.uk/speeches. If you would like to receive a copy following the event, please email mary@maryhampshire.com