A blind veteran from East Sussex has decided to walk 100 laps on Wednesday 7 July around the garden at Blind Veterans UK’s training and rehabilitation centre in Brighton, in order to raise money for the national charity for vision-impaired ex-Service men and women. 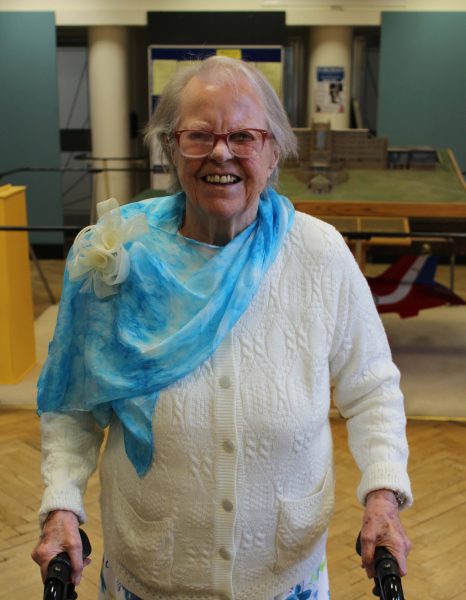 Nancy Bowstead, 99 who lives in Brighton, will turn 100 on 18 September this year and has been inspired by Sir Captain Tom’s fundraising efforts. Nancy says:

“I would love to do a fundraising challenge before my 100th birthday. Sir Captain Tom was a great inspiration and I hope that I can raise as much money as he did!”

Nancy joined the Auxiliary Territorial Service (ATS) in 1941, training at Lancaster and Oswestry. Selected for officer training, she trained at Harrogate and Edinburgh and was commissioned as an officer in 1943. She was then on a gun site in Swansea for the remainder of the war and was discharged as a Subaltern in 1948.

Nancy lost her sight due to glaucoma but fortunately she found Blind Veterans UK and started to receive support from the charity in 2011. She says:

“I have been a resident at the Brighton for nearly five years. I’ve lived here during lockdown and haven’t been able to see my family. It’s so important to keep supporting charities especially at the moment and I want to do my bit to get the country back on its feet again!”

Last year during the lockdown period, Nancy sadly lost Peter whom she met at the Brighton Centre. In March 2019, Nancy and Peter had a love blessing at the charity’s chapel in Brighton.

The staff at the Brighton centre will decorate the garden ahead of Nancy’s walk with bunting and music will be played to encourage her on her way round. Nancy says:

“The garden will be in full bloom in July! I have decided to do 99 smaller circuits of the garden and then my final lap will be of the whole garden”.

Nancy has fundraised a lot over the years and did a similar walking challenge for her 90th birthday. She says:

“For my 90th birthday, I did a 90-minute walk and raised £3000! I’ve always wanted to give something back. When I was younger, I used to knit for the soldiers. I began knitting when I was five years old and I’ve never stopped! My mother once saw an advert which was asking people if they could knit balaclavas and mittens for the soldiers as their guns and metal caps were cold. We went to the hospital to collect the wool and I knitted 14 of each in total!”

“I am not surprised that Nancy has been inspired by Captain Sir Tom Moore to take on this extraordinary feat.  She has an indomitable spirit and is always looking for ways to help others.  Nancy is quite simply magnificent and deserves our full support for her 100th Birthday Challenge to raise funds to help her fellow blind veterans”.

To support Nancy in her walking challenge, please visit her fundraising page: https://bit.ly/3hhpvM3

As a result of the Covid-19 pandemic Blind Veterans UK has adapted its service to support its 5,000 beneficiaries, 90% of whom are over 70 and were advised by the Government to self-isolate. The National Support Service has helped blind veterans through this period of social isolation.