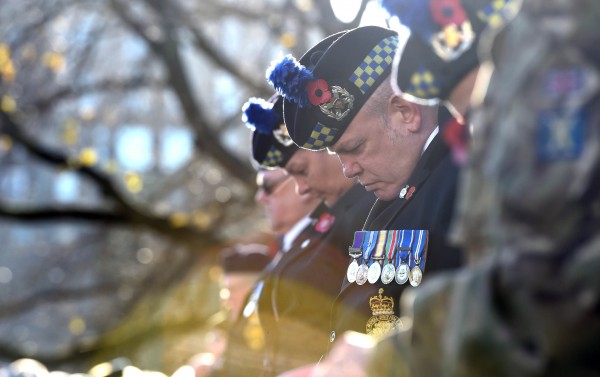 The firing of the Edinburgh Castle gun signaled the start of the Armistice Day Service, in Edinburgh, today (Saturday 11th November). A two-minute silence followed thereafter before the Rev Dr Karen K Campbell conducted the service in the Garden of Remembrance.

Members of the Armed Forces community, including veterans, attended the poignant event, organised by Legion Scotland, to remember those who have fallen in conflicts. Frank Ross, the Right Honourable Lord Provost of the City of Edinburgh, led a special group of wreath-layers at an event that was open to the public. The ‘Poppy Bus’ – provided by Lothian Buses and appropriately numbered 11 – halted beside the Garden of Remembrance at 11am.

Tomorrow (Sunday, November 12th), the Lord Provost will be joined by First Minister Nicola Sturgeon and fellow politicians, as well as members of the Armed Forces community, for a ceremony at the Stone of Remembrance to mark Remembrance Sunday.

More than 100 wreaths will be laid at the poignant service, organised by Legion Scotland at the City Chambers, to remember those who have fallen in conflicts. Sir Alistair Irwin KCB CBE, the President of Legion Scotland and Poppyscotland, will read Binyon’s Lines after the bugler has played the Last Post.

Before, during and after today’s service, Poppyscotland’s 10,000-strong team of volunteers across the country were hard at work collecting for the charity. In Edinburgh, more than 130 volunteers – including Army cadets, Air cadets and Navy Officer cadets – manned the key points all over the city

Sìne Ward, Poppy Appeal Organiser East for Poppyscotland, said: “It has gone really well today. There has been lots of public engagement, chat and stories. It has been sunny and busy, and everyone seems to be having a great time. We cannot thank our wonderful volunteers enough for all of their efforts today.” 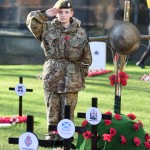 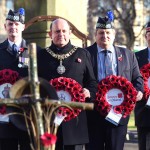 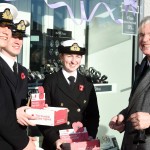 All day today people have been giving generously to buy a Poppy for the Poppy appeal. 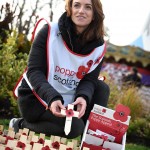 Volunteer Christie McMonagle helps plan a cross for a relative at the Edinburgh Field of Remembrance. 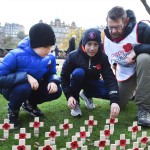 Fabian Bonkowoski (12) and filip Bonowski (9) from Poland lay a wreath for the fallen at edinburgh Field of Remembrance today.