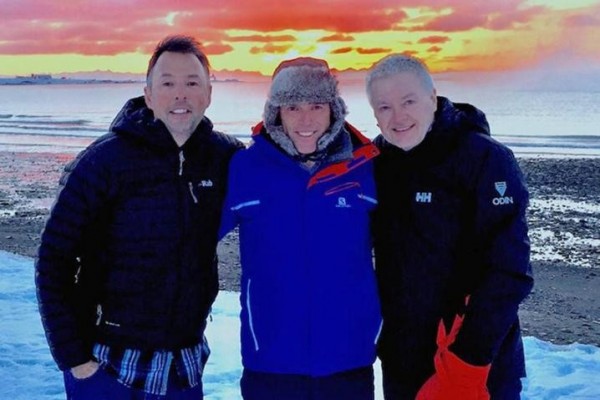 Businessmen Ian Langley, Graeme Shankland and Roger Wood are hoping to raise £25,000 for charity in January by embarking on an epic 150 kilometre trek to the South Pole.

Facing temperatures of up to minus 40 degrees Celsius, the intrepid trio will be spending almost two weeks hauling their equipment sleds across the desolate Antarctic ice, enduring twenty-four hours of daylight at an altitude of 10,000 feet.

Ian, Graeme and Roger have paid all costs incurred on the trip, and every penny of the money raised will be split equally between the Royal Air Force Benevolent Fund, Kidneys for Life and the Christie Hospital.

The trio left the UK on 30 December, where, via Punta Arenas in Chile and the Union Glacier Camp in Antarctica, they’ll be catching a DC4 plane to 89 degrees south. After a day of acclimatising to the extreme conditions, the trek begins, with the group hoping to reach the South Pole marker by mid January.

All three men are members of the ‘April Fools Club’, a group of senior professionals within the business, finance, legal and medical communities with an active interest in supporting the RAF. In 2015, the Club raised almost £200,000 for the RAF Benevolent Fund with a sponsored yomp across the Falkland Islands.

“I’ve had a personal fascination with Antarctica for many years and have a particular interest in the life of Sir Ernest Shackleton. After the Falklands yomp in 2015, I began thinking about the Club’s next fundraising challenge. The journey to the South Pole was the perfect opportunity to raise money for three deserving charities whilst following in the footsteps of one of the world’s most famous polar explorers.”

In order to prepare for the challenge, Ian, Graeme and Roger endured a five-day training camp in Norway, during which they were taught to erect tents in freezing conditions, cross-country ski whilst hauling equipment sleds and sample the mental and physical challenges that lay ahead.

Ian Langley said: “The Antarctic plateau is an isolated and featureless terrain and because of this, disorientation is potentially one of the biggest obstacles that the three of us could face during the challenge. However, in Graeme and Roger, I have two supportive and humorous friends beside me and I’m confident that the three of us will be spurring each other on kilometre after kilometre until we reach the famous South Pole marker.”

As April Fools Club members, the RAF Benevolent Fund is a charity close to the heart of all three of the fundraisers, none more so than Roger, whose father served in Bomber Command in 1944.

Roger Wood said: “My father was a bomb aimer with Bomber Command No. 75 Squadron and sadly passed away in 2015. He was very enthusiastic and supportive of the Falklands Yomp that the Club did for the RAF Benevolent Fund and I’ll be taking on this exciting challenge in honour of his memory.”

Roger will also be raising money in memory of his late wife, a former kidney transplant patient and beneficiary of the care provided by the Christie Hospital.

“At a time of year when many of us will be spending much-cherished time with our family and friends Ian, Graeme and Roger will be very altruistically putting themselves through gruelling and isolated conditions, raising thousands of pounds for the benefit of others. The RAF Benevolent Fund is extremely grateful to the three of them for taking on this remarkable fundraising challenge and wishes them safe passage during their trek south.”

You can follow the progress of the group’s journey south via their live expedition blog.

Anyone wishing to support the trio can donate here: http://uk.virginmoneygiving.com/IanRoger

📰New research from @QinetiQ, in partnership with @WarwickIER and @RFEA_UK, and commissioned by @FiMTrust, has found… twitter.com/i/web/status/1…