The only choir in the world made up solely of blind veterans, ‘Vision in Song’, have moved their practice sessions online in order to allow the rehearsals to go on during the Covid-19 pandemic.

Click here to watch one of the virtual sessions in action.

Choir Mistress Jane Gould, 65 and from Woolverstone in Suffolk, records the practice sessions from her home and uploads them onto her YouTube channel on a weekly basis. 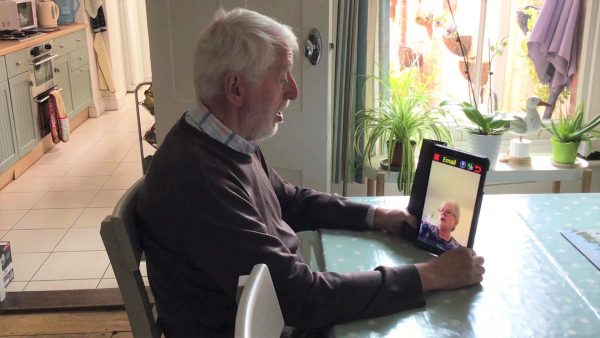 The choir members, who have specially adapted tablets for use by those with visual impairments, are able to navigate to the video and practice along with Jane at home.

“The weekly rehearsals have become extremely important in promoting the mental wellbeing of our choir members, providing a sense of purpose and alleviating the social isolation often experienced by blind veterans.

“I was determined to keep calm and carry on despite the circumstances so we found a work around. I’m extremely happy that we’ve managed to keep going and the feedback from members has been fantastic.”

Colin Humphreys, 81 and from Colchester, is one of the choir members enjoying the rehearsals from the comfort of his home. He says: “Being in the choir has become such an important part of my life, I’m so grateful that we’re still able to enjoy the fun and camaraderie even during this testing time.

“The feeling of belonging to a group in old age is very important to us. We all have each other’s phone numbers and regularly keep in touch during the week.”

Colin entered the military in 1958 and served as an Armoured Vehicles Mechanic with the Royal Electrical and Mechanical Engineers in Germany. It was later in life that macular degeneration stole Colin’s sight which has been in steady decline ever since. Luckily, Colin found out about Blind Veterans UK, who have been supporting him since his diagnosis.

“I can’t thank Blind Veterans UK enough. Not only did they introduce me to the choir, but they also trained me up on this tablet that uses audio and voice commands, allowing me to continue attending rehearsals during isolation.”

The choir have an average age of 85 and represent all three branches of the British Armed forces: Army, Navy and RAF. They perform an assortment of numbers from war-time classics to patriotic anthems and jazz hits. The men hail from a variety of communities across Essex including Basildon, Clacton-on-Sea, Colchester, Harwich, Halstead and Walton-on-the-Naze.

2019 was a big year for the group, with the release of their debut EP, ‘Sing as we go’, on Spotify, Apple Music and all other major streaming services. Alongside the EP, they released a music video for the song ‘Pack up your troubles in your old kit-bag’.

“The rehearsals have really brought the group together and provided companionship which is so crucial in combating the isolation that is so often felt in older people, particularly if they have a disability like sight loss.

“It all started with visiting one of our veterans called Danny. I visited him at home and was really moved by his story. His great love was singing but when he lost his sight he was unable to be accommodated by his old choir. I made it my mission to make sure Danny could sing as part of a choir group again.”

Danny Williams, 78 and from Harwich says:

“Jennie asked me what I missed most since my sight loss and without hesitation I told her it was being part of a singing group. Words cannot express how much joy Vision in Song has given me and I’m so thankful to Jennie and Blind Veterans UK for making it happen.”