On Saturday 28 May, a special Falklands 40th Anniversary dinner took place at Pangbourne College, Berkshire, to commemorate all those who fought and died in the 1982 conflict.

The event brought together prominent ABF The Soldiers’ Charity supporters and veterans of the Falklands Conflict, to raise funds for our charity’s work for veterans in need. 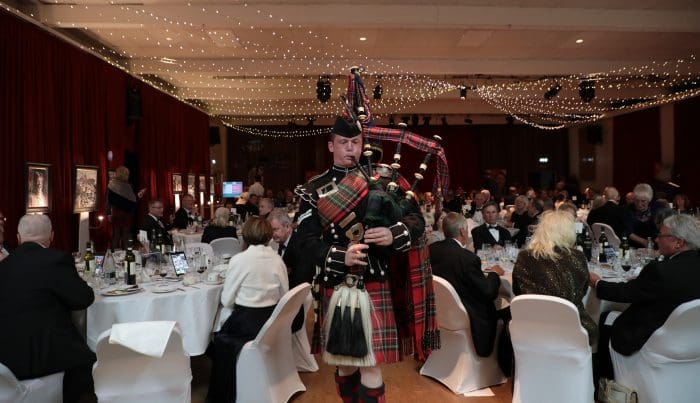 ABF The Soldiers’ Charity was honoured to host highly distinguished guest speakers who shared their personal memories of the conflict: Lt Gen John Kiszely KCB MC DL, a veteran of the Battle of Mount Tumbledown; Maj Gen Chip Chapman CB, who fought with 2 Para at the Battle of Goose Green; and Lt Col Chris Keeble DSO, who took command of 2 Para at Goose Green after the death of Lt Col H Jones VC.

During the evening, guests had the opportunity to visit The Falkland Islands Memorial Chapel, located in the grounds of the college. They also enjoyed music throughout the evening from the Royal Army Medical Corps band, and saw a fascinating exhibition of Falklands paintings by the renowned artist, Jeremy Houghton. A live charity auction was conducted by guest auctioneer Jonathan Pratt, from Dreweatts.

Other Falklands conflict veterans who spoke at the dinner included Lt Col Peter Bates OBE, who recalled his memories of the Battle of Mt Tumbledown, Mark Coreth who commissioned a special piece of sculpture for the charity auction, and Capt Alex Cameron who also fought at Mt Tumbledown.

The Betting and Gaming Council sponsored the dinner as longstanding supporters of the UK Armed Forces.

Since 1982, ABF The Soldiers’ Charity has steadfastly supported veterans who served in the conflict, and their immediate families. In the past two years, our charity has spent almost £240,000, both via grants to individuals and grants to 18 other charities including the Army Widows’ Association, Combat Stress, The Poppy Factory, Walking With The Wounded, Royal British Legion Industries, Defence Medical Welfare Service, Falklands Veterans Foundation, SSAFA, and SAMA (82).