Army veteran has run over 60 marathons in fancy dress to change the conversation around mental health in aid of charities including SSAFA, the Armed Forces charity. 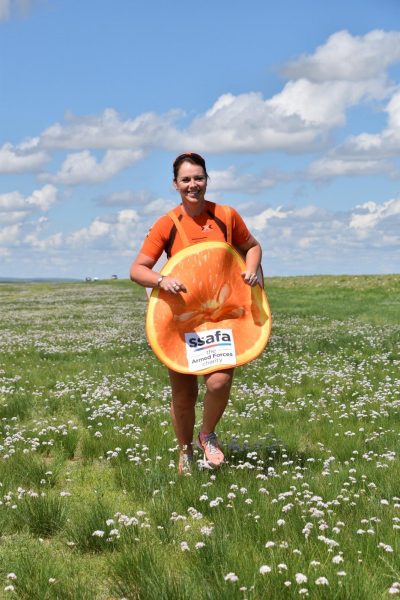 Staffordshire’s Sally Orange has been recognised with the Points of Light award by the Prime Minister for her fundraising efforts. She has run over 60 marathons in support of changing the conversation around mental health.

Sally served as a physiotherapy officer in the Royal Army Medical Corps for 22 years. During this time, she was deployed to Afghanistan, where she treated severely injured troops but was medically discharged after being diagnosed with severe depression and chronic anxiety. Her mission is deeply personal due to what she has been through in her own life.

“Living with a mental illness has made me extremely passionate about changing the conversation on, and reducing the stigma associated with, poor mental health. It is definitely better to light one candle than to curse the darkness and, through revealing my own vulnerabilities, I truly hope I can be the Point of Light in someone else’s darkness.”

Recently Sally supported SSAFA, the Armed Forces charity as she ran the world’s deepest underground marathon at the depth of 1000m in 30 – 40-degree heat. This marathon alone raised an amazing £4,730 for charities including SSAFA. This will help SSAFA provide lifelong support to those currently serving, veterans and their families, something Sally is extremely passionate about.

If you would like to support SSAFA further, please donate here: ssafa.org.uk/donate