Christmas can be a particularly difficult time for those missing loved ones. Therefore, last weekend, Scotty’s Little Soldiers, the charity for bereaved Forces children and young people, gave over 100 of its members a day to remember at a magical Christmas party, held at the Concorde Conference Centre in Manchester. 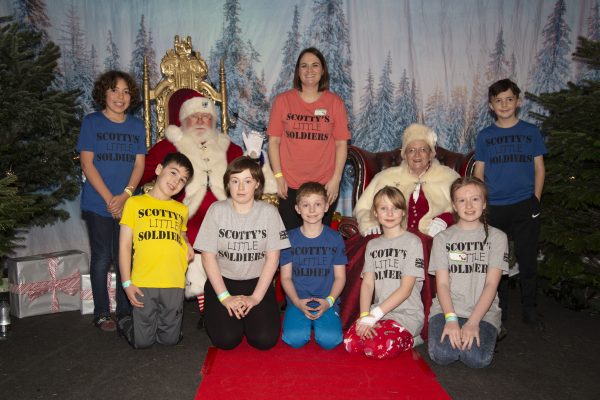 Scotty’s annual Christmas extravaganza brings together children and young people who have experienced the death of a parent who served in the British Armed Forces, to remind them they are not alone in their grief.

Children between the ages of 4 and 17 attended the show stopping event, which was organised by prestigious events company, Sharky and George. The theme of the party was Double Dare, which was selected by Scotty’s Members Council. The children and young people where split into teams and took on a number of challenges to encourage team building and friendships. There were lots of fun activities including a ball pit dome, Total Wipeout, a velcro wall, a climbing wall and Tug of War, as well as areas to relax and have some down time. There was an opportunity to go inside Concorde and the children were very excited when Father Christmas and Mrs Claus made a special appearance.

Aside from all the laughs and fun, children had the opportunity to remember their parent who had died by adding a special heart to Scotty’s memory tree. The team from Scotty’s were also on hand to offer emotional support if it was needed.

Scotty’s Little Soldiers was founded by war widow Nikki Scott in 2010, following the death of her husband and father to her two children, Corporal Lee Scott.

Speaking about the party, Nikki said:

“Christmas is such a special time, but we are very aware that it can be a difficult and emotional time of year for bereaved young people and their families.  It is a time when the media portrays happy families coming together to celebrate, which is a challenging concept for bereaved families to comprehend when someone in their life has died.  Our Christmas party is an opportunity to bring many of our members and their families together for an amazing experience with lots of fun, but most importantly to remind them they are part of the Scotty’s community and are not alone in their grief.

“The party was just what the children needed. We couldn’t get together in person last Christmas, so it was incredible to see members reunited, as well as new friendships being formed. Everywhere I looked, I could see children with huge smiles on their faces. At the end of the party, as the children and young people said goodbye, they were arranging to keep in touch, which is what it is all about.”

Tori and Bradley Blakemore, age 10 and 8, had been looking forward to the party for months. Their mum, PTE Sarah Blakemore, died by suicide in October 2020. They joined Scotty’s in March this year and were looking forward to meeting other members of Scotty’s. Their dad, Anthony (Blakey) Blakemore said afterwards:

“This party has given Tori and Bradley something to look forward to. Bradley has been playing Fortnite with Jack Rigby who is one of the other Scotty members and finally they have been able to meet. Usually, the children won’t leave my side, but as soon as we arrived at the party the children were off making friends. No one really understands what they have been through since their mum’s death, but at Scotty’s they do.”

“I loved the party. I enjoyed making friends. It makes me feel a bit more normal. It’s been really fun. I liked the velcro wall the best.”

“It was really great. I’ve made friends and they understand. I loved all the team activities. My favourite thing was the Total Wipeout Balls.”

Ryan and Ruby Thompson, age 8 and 5, have been members of Scotty’s since May 2017. Their dad, WO2 Stuart Thompson died by suicide in April 2017. Their mum, Rebecca Thompson, said:

“The party was amazing. I watched my kids grow in confidence and strength as they took part in activities and interacted with other children. Everyone at Scotty’s were so welcoming and it means so much to me, Ryan and Ruby to be around others in the same situation as us.”

Scotty’s Little Soldiers is currently providing assistance to hundreds of bereaved Forces children and young people around the UK and services offered include guidance to parents and carers, access to professional child bereavement support, personal education and learning assistance (including grants) and fun activities such as holiday respite breaks and group events. These are all designed to remind the children and young people supported by Scotty’s that they are not alone.

Special thanks to the Veterans’ Foundation and Piers Morgan for generously providing funding that has contributed a significant amount towards the cost of the party. Thank you also to Commando Joe’s, RPK Photography, CC1 Norfolk, The Royal Navy and Royal Marines Charity, ABF The Soldiers’ Charity, Overwatch subscribers and to all of Scotty’s incredible supporters.