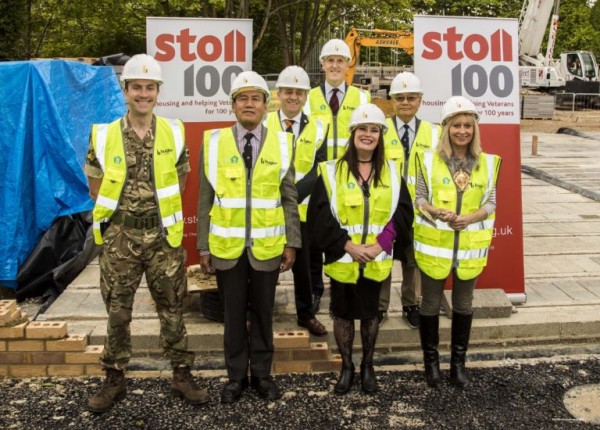 Armed Forces Veterans have laid the first bricks at Stoll’s new development in Aldershot. Stoll, the leading provider of Veterans’ housing and support, is building 34 new homes for vulnerable and disabled Veterans to rent. The new homes are being built on the site of the former care home on the edge of a nature reserve in suburban Aldershot to address the housing shortage faced by the nation’s ex-Service men and women. The new homes will be available to rent from March 2018.

Armed Forces Veterans were joined by Councillor Jacqui Vosper, the Mayor of Rushmoor, Councillor Clifford, the Leader of Rushmoor Council and Captain Andy Green.  The first bricks were placed by Veterans who have been housed and supported by Stoll.

Ian Belcher, Army Veteran and current resident laid the first bricks on the Aldershot site. He said: “When I came out of the Army, I was in a temporary hostel and ended up kipping in a tent. The more houses for Veterans the better; I think Stoll’s Aldershot site will make all the difference for Veterans who need it most.”

Tina, Navy Veteran and Stoll resident, said: “The Aldershot development is going to be calming, welcoming and homely which is so important for Veterans who are going through transition or have been unsettled. Coming straight from military quarters, affordable housing is key to make sure the change to civilian life is as easy as possible for Veterans.”