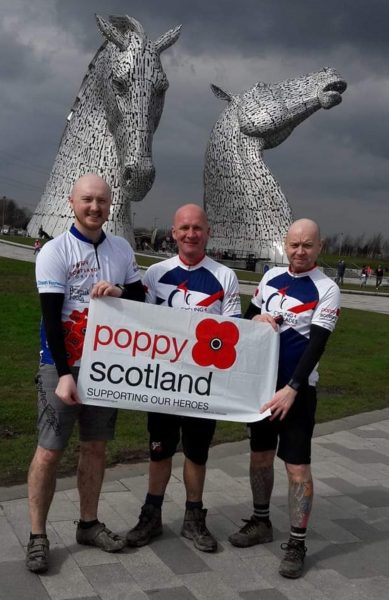 A trio of kind-hearted cycling friends are set to embark on another arduous adventure in order to raise funds for Poppyscotland. The self-styled ‘Flying Fifers’, all of whom live in and around Leven, Fife, are taking part in their fourth ‘Cycle Of Remembrance’ for the charity, which will see them tackle the famous route from Land’s End to John o’ Groats.

Along with others, the trio – made up of Sandy Cunningham, 51, and father-and-son John,52, and Joel, 26, Duffin – have already raised thousands of pounds for Poppyscotland over the past three years, but their desire to help the Armed Forces charity, which, in turn, can allow it to continue to support veterans across Fife and the rest of the country, remains undimmed.

The generous cyclists, who, along with friends from the same locale, have previously completed biking odysseys to France and Belgium, as well as running the Edinburgh Marathon, will set off on Thursday evening (18 July), and are aiming to arrive by van at Land’s End overnight. Incredibly, the three intend to start the cycle almost as soon as they arrive.

One of those who has organised the event is Sandy Cunningham. Sandy, who works for Scottish Water, said:

“This is our fourth cycling adventure for Poppyscotland having already cycled to Belgium and France on two occasions. It is going to be a very long first day after we arrive, but hopefully the adrenalin will keep us going, and if we can get 60 miles or so we will be happy. After that, we’ll get some well-earned rest in our one-man tents!

“Overall, we are cycling the 1,000 miles unsupported and we are carrying all of our camping equipment. The bikes, as you can imagine, are very heavy with all our clothes, cookers and tents on board. We are aiming to complete the cycle in around nine days, which means having to cycle more than 100 miles per day.

“If all is going well – and depending on the weather – we plan to meet our families on the Forth Road Bridge on Wednesday night or Thursday morning. We’ll keep heading north and we plan to pop into Poppyscotland’s Welfare Centre in Inverness on the Friday.”

Incredibly, the Flying Fifers have already raised – when Gift Aid is applied – a whopping £7,400, which will be split between Poppyscotland and another of the group’s chosen charities. Diageo, where both John and Joel work, have pledged a further £3,000 at the conclusion of the challenge, and the trio are hopeful of receiving more donations during the cycle. What’s more, they have already taken part in the Edinburgh Marathon again and they held a collection for Poppyscotland at their local Sainsbury’s supermarket as they do each year.

“We cannot thank everyone enough for the donations and support over the years. 2018 was a deeply saddening year in our personal lives losing dear friends to various illnesses, including Richard Smart after a brave battle with brain cancer. I worked with Richard at Scottish Water, but he had previously served with Black Watch. He was only 42 when he passed away. We are proud to do our bit and we hope that 2019 is another successful year for this fantastic charity.”

To donate to this year’s Flying Fifers’ Cycle of Remembrance, please visit: https://uk.virginmoneygiving.com/Team/AbsentFriends

“The support we have had from the Flying Fifers over the course of the past few years has been nothing short of incredible. Their commitment and dedication to the cause has helped to raise tens of thousands of pounds for Poppyscotland; money which has been used to help the Armed Forces community across Scotland. We cannot thank them enough for all that they have done and continue to do, and we wish them all the very best for their latest challenge, which I am quite sure they relish.”