You are here: Home / News / News / The Flying Fifers ready to ride for poppyscotland

The Flying Fifers ready to ride for poppyscotland 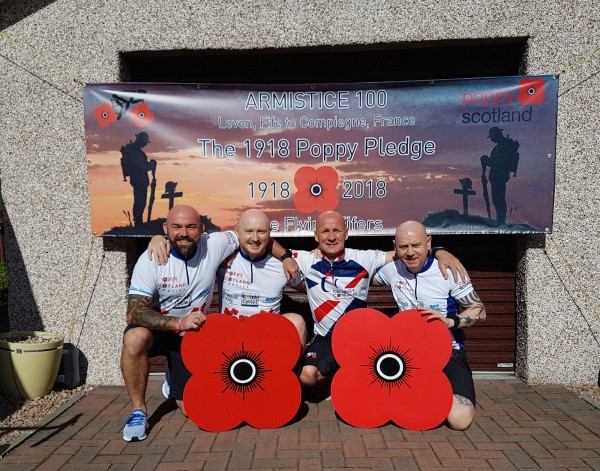 A group of cyclists are gearing up for yet another fundraising odyssey to help raises thousands of pounds for leading Armed Forces charity Poppyscotland. The Flying Fifers will set off on Saturday (June 30th) from Leven and will cycle more than 120 miles a day for six days until they arrive in the French commune of Compiègne where the 1918 Armistice was signed. Just a few miles into their route will see the group taking part in the Armed Forces Day parade along Edinburgh’s George Street.

The Flying Fifers have been great supporters of Poppyscotland for the past few years and this will be their third Cycle of Remembrance. They have already raised more than £50,000 for the charity and this year they have taken The 1918 Poppy Pledge; a year-long charitable challenge that calls on people to raise £1,918 to commemorate the 100-year anniversary of the beginning of the end of the First World War.

Leading the cycling quartet is Thomas Bremner, 45, who served in the Royal Signals from 1989 to 1998 and now works as a self-employed labourer. He is joined by Sandy Cunningham, 50, and father and son John, 51, and Joel Duffin, 25. All four men are from the Levenmouth area. Their support driver is Rodney MacConnochie, 51, from Leven. Thomas, from Kennoway, said: “We have been fundraising for Poppyscotland since 2012 and have raised £50,000 and counting! We hope to raise £9,590 this year, which is the total of each of the five team members taking on The 1918 Poppy Pledge to raise £1,918.

“I am the only one with a military background; the other lads have none, which makes their efforts for Poppyscotland even more special as they have a massive respect for the sacrifices that have been made by our Armed Forces and they like to support our Armed Forces in anyway they can.”

Thomas added: “I personally raise funds for this important charity as I feel the Army gave me a great start in adult life. I joined as a 16-year-old junior and through my time in the Army I believe it has helped me be the person I am today. I am also very appreciative of the fact that I left the Army both mentally and physically unscathed. The cycle will hopefully raise vital funds for Poppyscotland to be able to continue the amazing work it does with our Armed Forces community.

“With regards to the cycle, I am really looking forward to it as I like being part of a team and I also like the personal and physical challenge of it. We are on our own with our driver, carrying food and spares; we navigate as a team, eat as a team, moan and laugh as a team and sleep as a team. We are self-funded, so all donations go straight to Poppyscotland.”

Gordon Michie, the Head of Fundraising at Poppyscotland, said: “Over the past four years, The Flying Fifers have been incredible in their support for Poppyscotland. They have taken on two previous Cycles of Remembrance and this is their third. Not only that, but they have run in the Edinburgh Marathon Festival, taken on the Sportive cycling challenge and bungee jumped; it really is amazing.

“Poppyscotland cannot thank them enough and through all their hard work. They have raised more than £50,000 which is what allows our welfare team to continue supporting the Armed Forces community in Scotland.”